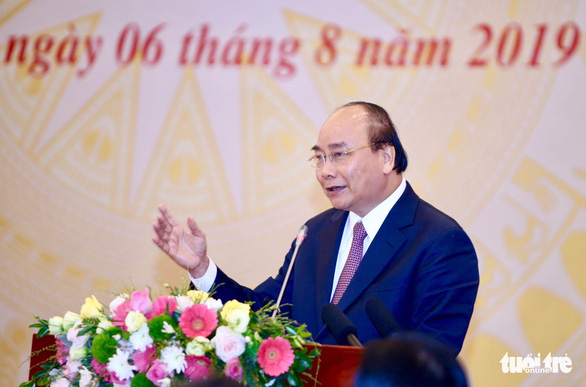 Read what is in the news today, August 7!

-- A first grader of an international elementary school in Hanoi died Tuesday after he was allegedly abandoned in a school bus for the whole day.

-- Police in Ho Chi Minh City have identified a cycle rickshaw driver who charged an 83-year-old Japanese tourist VND2.9 million (US$125) for a short ride on Saturday. The man is facing a criminal charge of property appropriation, police said.

-- Only 28.3 percent of Vietnamese aged 18 or above attend college or own a tertiary degree, which is much lower than some other countries including Thailand (49.3 percent), Japan (63.6 percent), the U.S. (88.8 percent) and South Korea (93.8 percent), an education official said at a meeting in Hanoi on Tuesday.

-- Vietnamese businesses will suffer if the recent developments of trade tensions between the U.S. and China, with Washington labelling Beijing as a currency manipulator on Monday after the latter allowed the value of its currency to fall, escalate into an all-out currency war, industry insiders and economic experts in Vietnam warned.

-- Vietnam exported 4.01 million metric tons of rice, worth US$1.73 billion, in the first seven months of 2019, up 2.1 percent in volume but down 14.3 percent in value year on year, according to the Ministry of Agriculture and Rural Development. The Philippines was the biggest buyer that purchased 33.7 percent of Vietnam’s rice exports during the period.

-- Vietnam wants to have at least five billion-dollar startup tech firms (unicorns) by 2025 and ten by 2030, as well as being in the top 30 countries in terms of number of patents in the prioritized technology sectors by 2025, according to a draft on national strategy on the Fourth Industrial Revolution (Industry 4.0) announced by the Ministry of Planning and Investment.

-- Total retail sales of goods and services in Vietnam in the first seven months of the year rose 11.6 percent from the same period in 2018 to reach VND2.8 quadrillion ($120.36 billion), according to the General Statistics Office.

-- The Ministry of Industry and Trade said Tuesday it would propose reducing taxes on domestically produced automobile parts to support the country’s supporting industries and promote domestic production of cars, especially those run on electricity.

-- Prime Minister Nguyen Xuan Phuc has requested that ethics, lifestyle and soft skills should be the focus of the Vietnamese education system in the approaching school year, which will begin in September, as he chaired a national teleconference in Hanoi on Tuesday.