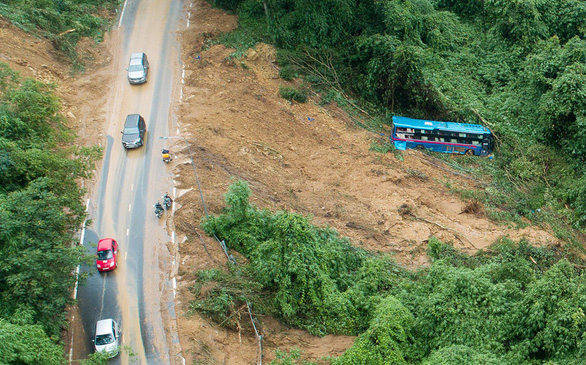 A crucial pass that links Da Lat with Ho Chi Minh City was cleared on Saturday afternoon after a landslide caused a 36-hour-long traffic block, stranding many tourists in the highland retreat.

The serious landslip on Bao Loc Mountain Pass on Friday resulted from heavy rains that started on Wednesday night in the Central Highlands Province of Lam Dong, whose capital is Da Lat.

Authorities believe this is the most serious landslide that has occurred in the area in the past 10 years, causing thousands of cubic meters of dirt from 10 different places to drop down onto National Highway No. 20 on Friday, completely blocking traffic for 10 hours.

Ten hours after the land collapse, the authorities were only able to reopen one single way of the mountain pass, leading to a serious traffic jam along a 25-kilometer-long road section for 36 hours, as people were trying to move from Da Lat.

This situation prevented many tourists from leaving the city.

Only around 10 to 15 percent of tourists travel to Da Lat by air, the rest choosing to travel by road, Tran The Dung, deputy director of The He Tre (Young Generation) Travel Company, said.

Fiditour Travel Agency was also required to change tour schedules so they would include more indoor activities to avoid the heavy rains, according to the firm's marketing director.

TransViet Travel Company had some of their customers stuck in Da Lat due to canceled flights and limited transportation.

Earlier this week, many localities across the Central Highlands was submerged and isolated after continuous rains.

Other areas have also been affected by the weather conditions.

Phu Quoc Island off the Mekong Delta province of Kieng Giang fell victim to the rains, causing many tourists to be stranded as flights to the island had been canceled until 8:30 pm on Friday.

According to Vietravel, the company had over 400 customers on Phu Quoc Island who were scheduled to return to Hanoi and Ho Chi Minh City within Friday, but the firm managed to rearrange a place for them to stay over canceled flights.

The company has had to cancel all the other tours to Phu Quoc scheduled for Friday to Sunday as well.