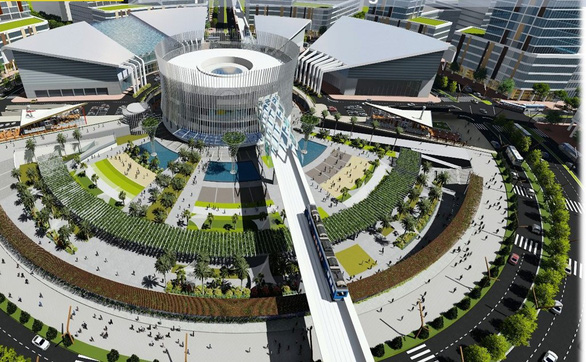 For the second time in a row, the southern Vietnamese province of Binh Duong has been named one of the urban areas with the most typical smart city development plan in the world. What has helped Binh Duong obtain such an achievement?

At a recent ceremony in New York City, the United States, the Intelligent Community Forum (ICF) announced the world’s Smart21 Communities of 2020.

Binh Duong Smart City was the only representative from Vietnam in the list.

It was the second consecutive year Binh Duong had made it to the ICF’s Smart21 list.

The smart city project, launched in 2016, is an important content of the province's breakthrough development programs. Its core mission is to build an interaction between the state, scientists, and entrepreneurs.

To execute the project, Binh Duong has coordinated with Eindhoven City in the Netherlands, as well as the South Korean city of Daejon and the World Technopolis Association.

The idea of forming a smart city reflects the strong desire for prosperity of leaders, authorities, businesses, and the people of Binh Duong.

For more than two decades, Binh Duong Province has successfully attracted a large amount of foreign investment and is only ranked behind Hanoi and Ho Chi Minh City in this regard.

The southern province now focuses on attracting investment in high-tech science, which would bring about greater productivity and value.

With the advantage of developed and organized infrastructure, Binh Duong’s smart city project will also seek solutions to better improve the living conditions of local residents.

The Binh Duong Smart City project has had its development strategy mapped out with the initiation of many specific projects.

During the upcoming 2019 Asian Economic Cooperation Forum (Horasis) organized in Binh Duong in November, local authorities are expected to announce the construction of the World Trade Center in the Binh Duong New City.

The grand project is hoped to mark an important milestone in the development of the city.

Covering an area of 24 hectares, the World Trade Center will be located next to the centralized administrative center of Binh Duong Province and well-connected with other localities in Binh Duong as well as with neighboring Ho Chi Minh City.

The trade center will be comprised of many buildings such as offices, conference and exhibition centers, shopping malls, hotels, and entertainment facilities.

In addition, the center will also provide “soft infrastructure” by creating a convenient environment for investors, businesses, scientists, and students to connect and form cooperation.

As a member of the WTCA, Binh Duong will have many opportunities to promote international cooperation, connecting domestic enterprises with businesses around the world.

Headquartered in New York, the ICF is a reputable international organization with more than 180 members that are smart cities and urban areas across the world.

Being listed as one of the ICF’s Smart21 Communities for two years in a row, Binh Duong will surely catch the interest of the international community and investors.

The 2019 Horasis is scheduled to take place in Binh Duong from November 23 to 26 with the attendance of 400 senior guests from 60 countries, as well as hundreds of participants from Vietnam.

The forum will bring together the world's top entrepreneurs with its plenary sessions and dozens of dialogues.

This is the second time Binh Duong has been chosen as the host of the Horasis, following the success of last year’s event, which left a good impression on international friends.