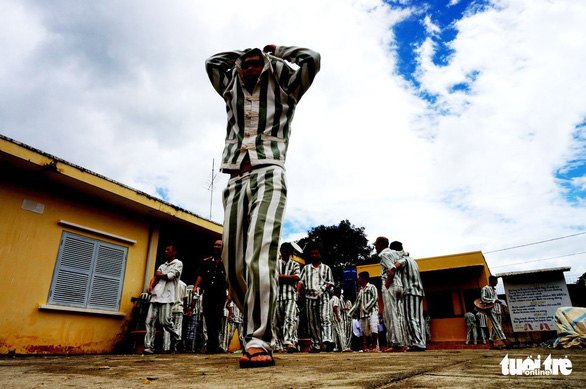 An inmate convicted of murder has been arrested just over a day after breaking out of a prison in Vietnam’s Central Highlands region thanks to sighting reports by local residents.

Tuan is a murder convict who is serving a 20-year jail term at the Dai Binh Prison in Loc Nam Commune.

He escaped on Monday afternoon while returning to his cell after an outdoor penal labor session.

Following the jailbreak, Tuan hid at a local coffee plantation before changing into civilian clothes stolen from nearby houses as a disguise.

On Tuesday night, Tuan approached some local residents asking for a ride to the Duc Long Bus Station in Lam Dong’s Bao Loc City with the intention of catching a coach to the south-central province of Ninh Thuan.

The residents found Tuan suspicious and secretly reported him to police officers.

At around 1:00 am on Wednesday, the inmate was apprehended while hitchhiking along National Highway 50.

He was immediately brought back to the Dai Binh Prison.

Officers said they had carefully planned the ambush to make sure the person giving Tuan a ride was not harmed.

According to the provincial Department of Police, Tuan fatally stabbed D.K.T., a Lam Dong resident, at the Duc Long Bus Station in Bao Loc on December 17, 2012.

T. had previously hired Tuan to work as a gardener.

A conflict later broke out between them over salary issues.

After killing his former employer, Tuan stole a motorbike and fled the scene.

He had been on the run for about four years before he was arrested in the north-central province of Thanh Hoa in early 2017.