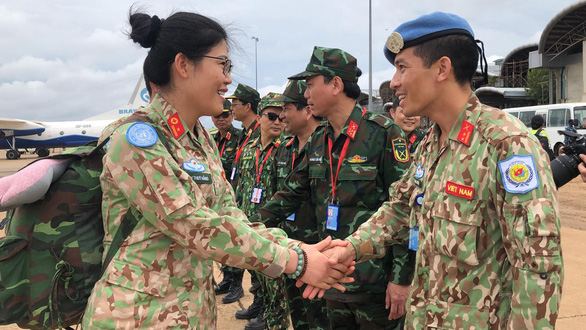 -- The first members of Vietnam’s level-2 field hospital rotation 2 arrived in Juba, the capital of South Sudan, on Wednesday morning to join the United Nations peacekeeping mission in the country.

-- A shallow 6.1-magnitude earthquake hit the northwestern region of Laos near the Thai border early Thursday and shakings could be felt nearly 500 kilometers away in the Vietnamese capital city of Hanoi, according to European-Mediterranean Seismological Center. Before that, a 4.2-magnitude earthquake occurred in the north-central Vietnamese province of Nghe An on Wednesday afternoon.

-- A female driver who fatally crashed her car into several motorbikes and a bicycle traveling in the same direction, killing one woman, near the intersection of Nguyen Ngoc Vu and Le Van Luong Streets in Hanoi on Wednesday morning, admitted to police officers that she had panicked and slammed on the wrong pedal as she was wearing high heels.

-- Different fire drills are scheduled to take place at the international terminal of Tan Son Nhat International Airport in Tan Binh District, April 30 Park in District 1, and the headquarters of the People’s Committee of District 1 in Ho Chi Minh City from 6:00 am to 10:00 am on November 23 and 24.

-- Hundreds of local people and borderland security officers joined hands and successfully saved a fishing boat aground near the Dong Tac inlet in Tuy Hoa City, the capital of the south-central province of Phu Yen, on Wednesday afternoon.

-- A large group of nearly 120 drug addicts staged a chaotic scene and escaped a rehab center in Chau Thanh District in the Mekong Delta province of Tien Giang on Wednesday morning.

-- Vingroup JSC said on Wednesday it had signed an agreement with Google to develop smart TVs using the Android platform.

-- A planned training session of Vietnam's national under-22 football team in District 7, Ho Chi Minh City on Wednesday evening in preparation for the Southeast Asian (SEA) Games 2019 was canceled as head coach Park Hang Seo was one hour behind schedule due to the late arrival of his flight from Hanoi.