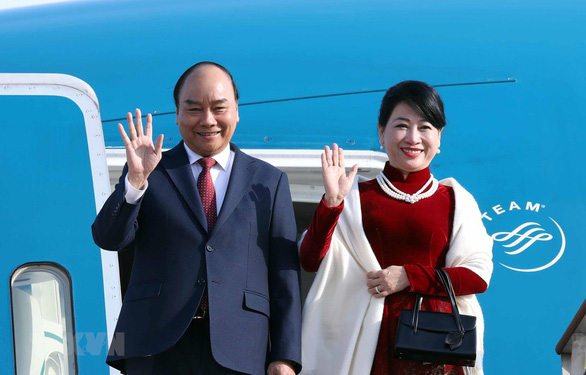 -- Vietnamese Prime Minister Nguyen Xuan Phuc and his spouse arrived in Seoul on Wednesday, beginning an official visit to South Korea at the invitation of South Korean President Moon Jae In. The visit follows the ASEAN – South Korea Commemorative Summit celebrating 30 years of their dialogue partnership and the first Mekong – South Korea Summit in the South Korean metropolis of Busan.

-- The Chinese government has provided Vietnam with non-refundable aid worth VND33.4 billion (US$1.44 million) to conduct a survey and a master plan for the Lao Cai – Hai Phong – Hanoi railway project connecting with China, according to the Ministry of Transport.

-- Hanoi will abolish people’s councils in 117 wards from July 1, 2021, as part of a pilot administrative reconstruction plan, which was passed by lawmakers with an overwhelming majority of votes on Wednesday.

-- Authorities broke ground on a project worth VND920 billion ($39.6 million) to upgrade and expand a number of major streets on Phu Quoc Island off the southern province of Kien Giang on Wednesday.

-- The 44-year-old mother of Cao My Duyen, who was kidnapped, raped, and murdered by eight men in the northern province of Dien Bien in early February, was sentenced to 20 years in prison for trading drugs as she belonged to a drug ring whose members were directly behind the murder case.

-- Four employees of Alibaba, a real estate corporation in Ho Chi Minh City’s Thu Duc District that had been accused of fraudulently offering for sale thousands of land plots in 48 ‘phantom’ projects in the city and the southern provinces of Ba Ria-Vung Tau, Dong Nai, and Binh Thuan, on Wednesday afternoon received sentences between 2.5 years and 4.5 years in jail each for “disturbing public order.”

-- Three first graders from an elementary school in Bien Hoa City in the southern province of Dong Nai sustained minor injuries after falling off a school bus, the back door of which suddenly pulled open when the vehicle made a sharp turn on Tuesday morning.

-- The Japanese Embassy in Vietnam has suspended the visa application representative status of 36 overseas study consulting companies in the Southeast Asian country.

-- Song Lang (The Tap Box), a movie that highlights the 100-year history and development of Vietnamese ‘cai luong’ (reformed opera) - a genre of traditional theater in southern Vietnam, won the 2019 Golden Lotus award for the Best Feature Film at the annual Vietnam Film Festival in the southern province of Ba Ria-Vung Tau on Wednesday night.