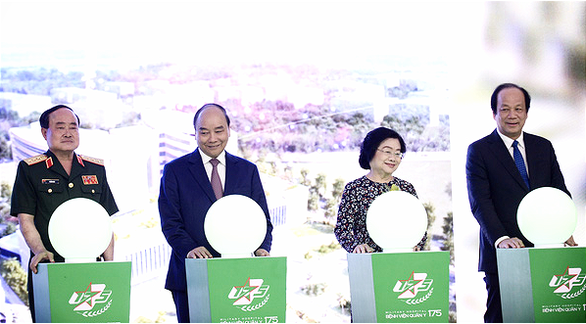 -- Prime Minister Nguyen Xuan Phuc had an intimate meeting with and hosted a welcome party for both the Vietnamese men’s and women’s football teams upon their return home on Wednesday evening after collecting double gold medals at the 30th Southeast Asian (SEA) Games in the Philippines.

-- Thousands of Vietnamese fans flocked to Noi Bai International Airport in Hanoi on Wednesday evening to welcome home their men's and women's football teams from the 30th SEA Games in the Philippines.

-- The Trauma and Orthopedics Institute within Military Hospital 175 was inaugurated in Go Vap District, Ho Chi Minh City, on Wednesday morning after more than four years of construction at a cost of VND2.2 trillion (US$95.43 million).

-- The Ho Chi Minh City Maritime Administration confirmed on Wednesday evening that rescue forces had found the body of a diver while two other divers remained missing after the trio had been taking part in the salvage of a container ship which sank on October 19 in the Long Tau channel that feeds into the Cai Mep deep-water port in the southern metropolis.

-- The Ho Chi Minh City Department of Transport said on Wednesday that the 15-kilometer public ferry route connecting the city’s outlying island district of Can Gio and Vung Tau City in the southern province of Ba Ria – Vung Tau is planned to be put into operation at a frequency of 24 one-way trips a day from April 2020.

- A fire completely gutted four restaurants on the bank of An Bang Beach in Hoi An City in the central province of Quang Nam at around 2:00 am on Thursday.

-- ‘You can talk to me,’ an exhibition displaying various works of art by contemporary artists, representing different dimensions of the issue of victim-blaming in sexual harassment and abuse, is taking place at 6B Nguyen Canh Chan Street in District 1, Ho Chi Minh City and open to visitors every day from 9:00 am to 8:00 pm until December 14.

-- About 1,000 bowls of ‘pho’ will be cooked and served to underprivileged children at To Vinh Dien Elementary School in the rural district of Bu Dang in the southern province of Binh Phuoc on Thursday at a charity event in honor of the official Day of Pho (December 12), which was designated as a celebration of Vietnam’s most popular dish in 2018.

-- The 39th edition of the National Television Festival was launched in Nha Trang City in the south-central province of Khanh Hoa on Wednesday evening and will run until December 14.