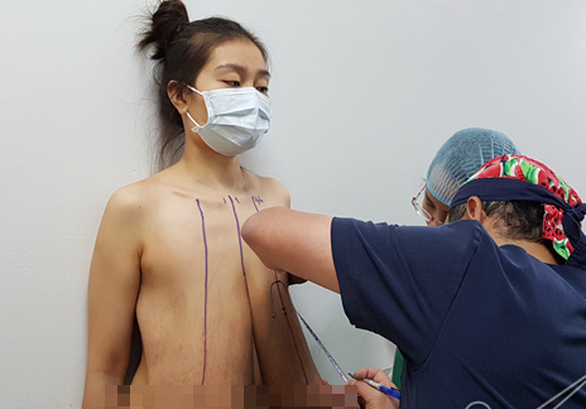 A Vietnamese woman whose breasts have been growing uncontrollably for the past 11 years, reaching nearly half a meter long on each side, has undergone a successful surgery this week to reduce their size.

Loan, a 31-year-old woman from Ho Chi Minh City identified only by her first name for privacy reasons, has suffered from shortness of breath, difficulty moving, and chronic pain since the age of 20 due to her oversized breasts.

According to Loan, her breasts had been growing normally before she turned 20, when they began to get larger and larger without stopping.

Loan refused to seek medical help until 2014, when her breasts had already grown unbearably large and was causing her pain.

Doctors diagnosed Loan with breast hypertrophy, a rare medical condition of the breast connective tissues in which the breasts become excessively large.

She was advised to go under the knife to remove one-third of the tissues on each breast.

The surgery helped reduce Loan’s breast size, but it did not stop them from continuing growing.

Her breasts got bigger again, this time growing six times larger, when she was pregnant with her first child in 2018.

Her gigantic breast size meant that she had to wear three bras at a time just to be able to move.

She had to take an early maternity leave five months into her pregnancy as the huge breasts made it impossible for her to go to work.

One week after giving birth, Loan noticed her breasts were getting longer instead of larger.

The woman’s breasts measured 46 and 49 centimeters in length – so long that she had to position them on her sides to be able to breathe and sleep – when she sought surgical interference once again.

Doctors at the Hanoi Medical University Hospital in the Vietnamese capital performed a second breast-reduction surgery to remove two kilograms of tissues per breast off Loan.

They estimated that her breasts were growing five centimeters longer monthly and would stretch until they reach her feet without an operation.

Breast reduction helps patients with breast hypertrophy retain mammary glands to ensure that the women can still breastfeed their children after surgery, according to the doctors.

With the two-hour surgery turning out successful on Monday, Loan’s breasts now return to their normal size.

According to the doctors, Loan can currently perform light activities and is set to be discharged from the hospital in the next four days.

According to Prof. Dr. Tran Thiet Son, who performed the breast-reduction surgery on Loan, she is a rare case of breast hypertrophy that he has not encountered in several years.