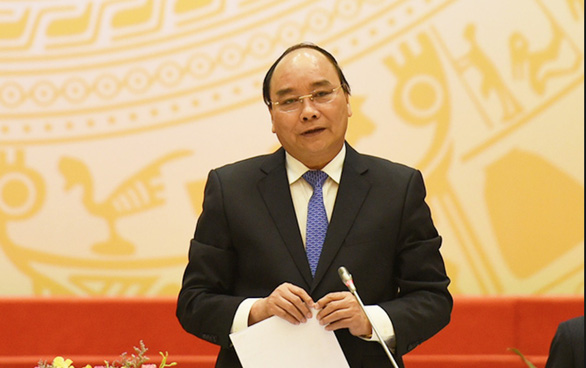 The order was published on the Vietnam Government Portal on Sunday afternoon.

Ministers, chiefs of agencies equivalent to ministries, heads of bodies under the central government, and chairs of provinces and centrally-administered cities are required to consider postponing their business trips to foreign countries so as to focus on curbing the COVID-19 epidemic and promoting business and production in the country, the prime minister said in the order.

The centrally-administered cities include Hanoi, Ho Chi Minh City, Da Nang, Hai Phong, and Can Tho.

A 61-year-old man, N.Q.T., was confirmed as the 21st COVID-19 patient in Vietnam on Sunday, according to an announcemen by the Ministry of Health.

The patient, living in Truc Bach Ward, Ba Dinh District, Hanoi, returned to Vietnam from England on the same flight as ‘patient No. 17’ N.H.N. on March 2.

N. tested positive for the novel coronavirus on Friday, after she had been through immigration without a fever.

The woman had traveled to Lombardy (Italy), Paris (France), and London (England) before the flight back to Hanoi.

Her chauffeur and aunt, who had close contact with her, caught the virus after taking N. to the hospital for testing in a car.

T. showed symptoms of fatigue and dry coughing on Friday.

His sample was taken on Saturday morning and returned positive the same day.

He is being treated at the second branch of the National Hospital of Tropical Diseases in Hanoi.

The London-Hanoi flight carried 201 passengers, of whom 48 are Vietnamese. They have traveled to different provinces and cities in Vietnam upon their arrival in Hanoi.

Vietnamese authorities are tracing the passengers on board the flight.

The flight crew and those in contact with the patients have been isolated.

COVID-19, which first surfaced in the central Chinese city of Wuhan in December 2019, has infected over 105,800 people and killed 3,605 globally, according to the Vietnamese Ministry of Health.

Vietnam has so far confirmed 21 infections, including 18 Vietnamese, two Chinese nationals, and one Vietnamese American.

Patient No. 17 was confirmed after Vietnam had reported no infection since February 13.