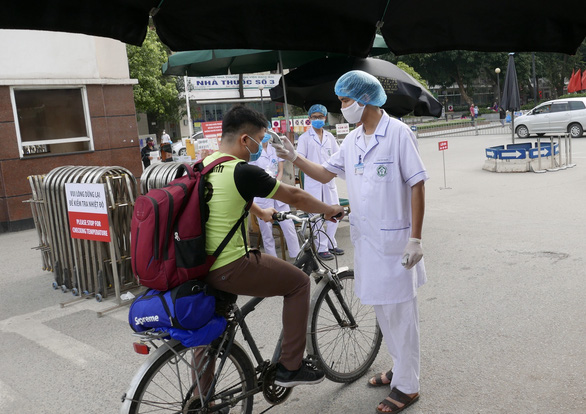 People should not go out when not really neccessary and those over 60 years old should absolutely stay home, the ministry said.

Residents are required to inform local authorities and police officers of arrivals, both local and foreign, to Vietnam from March 3 who have not been quarantined, it added.

Local administrations must strictly enforce the closure of entertainment and amusement places and heavily fine offenders, the ministry said.

Vietnam has recorded 14 new COVID-19 patients over the last 24 hours.

Ten of them were isolated upon entry into the country from abroad while one doctor caught the virus when treating an infected patient in Hanoi, the ministry said in a statement on Thursday. These 11 newly confirmed patients pose no risk of community spread.

The other three have spent some time in the community.

Seven of the new cases were announced early Thursday morning, including a man who had visited the U.S. Consulate General in Ho Chi Minh City.

He is a 26-year-old Vietnamese student studying in the U.S. and has a registered address in Binh Chanh District, Ho Chi Minh City.

He departed Texas on March 3 on seat 38A on the Eva Air flight BR395 that stopped over in Taiwan and landed at Tan Son Nhat International Airport in Ho Chi Minh City on March 10.

Upon entry, he visited his relative at Binh Dan Hospital in District 3 and the U.S. Consulate General in District 1 while he was also in contact with some officers in charge of temporary resident registration in Tan Tuc Commune, Binh Chanh District.

The student tested positive for COVID-19 on Monday and is now being treated at a field hospital in Can Gio, an outlying district of Ho Chi Minh City.

Vietnam has announced 148 patients so far, with 17 having been discharged from the hospital by Friday last week. No fatality has been reported as yet.

Over two dozen patients have tested negative for the virus but they are still treated in the hospital, waiting to be discharged, according to the health ministry.

The Vietnamese government has said the next two weeks is vital to its efforts to curb the COVID-19 epidemic, with resources to be focused on detecting cases early, isolating them and their contacts, limiting cross infection, and managing to treat patients.

Vietnam now requires all arrivals to be isolated in collective quarantine camps for 14 days – the advised incubation period of the virus.

The country has barred entry to all foreigners and demands all entrants declare their health status.

Passengers are required to fill out health declaration forms when traveling on long-haul buses, trains, tourist boats, and domestic flights.

The Southeast Asian country has quarantined 44,955 infected patients’ close contacts and arrivals from epidemic-hammered regions as of Thursday morning, according to the Ministry of Health’s latest statistics.