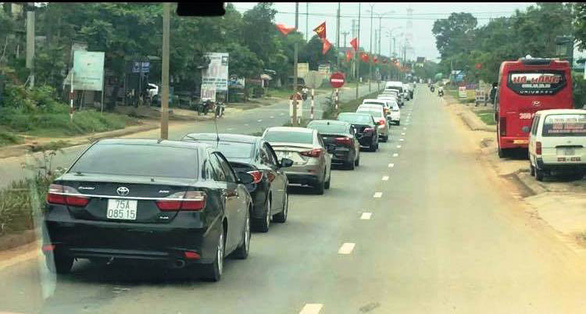 What you need to know today:

-- The administration of Ha Tinh Province, located in north-central Vietnam, on Thursday demanded that local healthcare authorities suspend a local hospital's vice-director after Tuoi Tre (Youth) newspaper reported on a line of cars running on a street on the way to his son's wedding, despite the prime minister's directive on nationwide social distancing in place from April 1 to 15.

-- Authorities in Thai Binh Province, located in northern Vietnam, now ban people from traveling to the province from Vietnamese localities hammered by COVID-19, the provincial chairman said in an urgent fiat on Thursday.

-- Relevant ministries in Vietnam have agreed to a proposal by the Hanoi Department of Planning and Investment on expanding the T2 terminal at Noi Bai International Airport to handle 15 million passengers a year, instead of 10 million presently.

-- National carrier Vietnam Airlines has announced a drop of VND50 trillion (US$2.1 billion) in revenue due to the COVID-19 pandemic, leading to 10,000 jobs lost.

-- Samsung Vietnam is expected to cut its export target for 2020 by $5.8 billion to $45.5 billion against 2019, according to the Vietnamese Ministry of Industry and Trade.

-- Prime Minister Nguyen Xuan Phuc has signed a decision on the establishment of a medical school under the Vietnam National University-Hanoi.

-- Over one million people have caught the novel coronavirus, with almost 53,000 killed globally, statistics showed on Friday. About 212,000 patients have recovered.