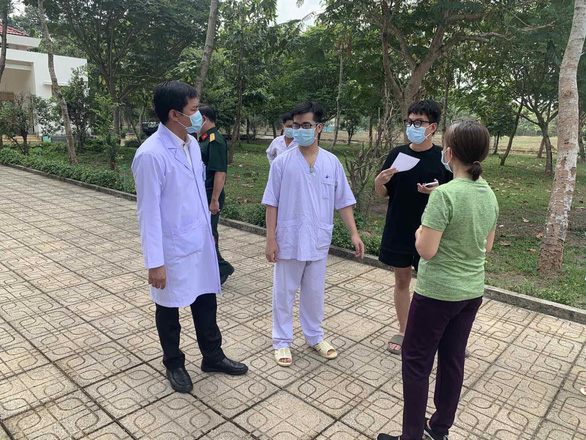 Three foreigners were among five patients allowed to leave a hospital in Ho Chi Minh City on Tuesday afternoon, as they had recovered from novel coronavirus disease (COVID-19).

Out of the 54 cases diagnosed in the city, only nine are active now, according to data collected by Tuoi Tre (Youth) newspaper. Among the patients undergoing treatment, a British pilot is in a critical condition at the Ho Chi Minh City for Tropical Diseases.

The hospital was established in Cu Chi, a suburban district of Ho Chi Minh City, to treat COVID-19 patients.

The five will self-isolate at home for 14 more days and will be subject to more testing during this period, according to updated healthcare regulations.

Patient No. 92 is a 21-year-old Vietnamese student and resides in the Central Highlands province of Lam Dong. He tested positive after returning to Vietnam from France.

Patient No. 124 is a 52-year-old Brazilian man living in District 2, Ho Chi Minh City. He visited the Buddha Bar & Grill in the district on the same day as the British pilot.

At least 18 cases have been traced to this bar.

Patient No. 127 is a 23-year-old of Vietnamese nationality, residing in Tan Phu District, Ho Chi Minh City. He worked as a waiter at the bar.

Patient No. 143 is a 58-year-old woman from South Africa, staying in Tan Phu District. She was exposed to a COVID-19 patient before her arrival in Vietnam.

Patient No. 158 is a 45-year-old Brazilian, staying in District 2. He was in contact with a confirmed patient at the bar.

Vietnam has managed to treat 168 of its 265 patients, with no virus-related death having been recorded, according to the latest statistics.

Infection rates have become slower over the past week, as the Southeast Asian country has announced only a few cases daily, apparently thanks to social distancing measures mandated by the central government.

The prime minister will decide whether to extend the social distancing period, lasting from April 1 to 15, on Wednesday.