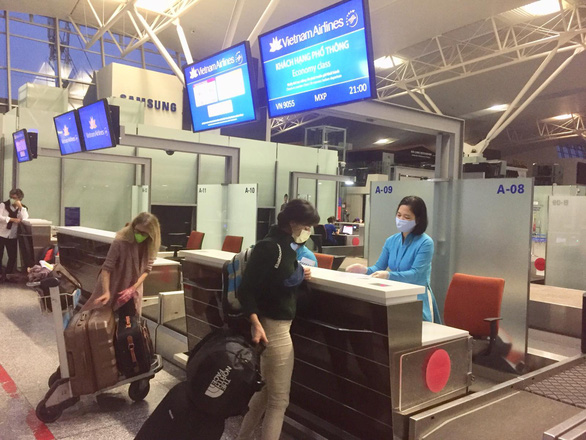 A Vietnam Airlines plane has brought home 50 Italian nationals previously stranded in Vietnam and carried four metric tons of medical gear in aid to Italy, while returning with Vietnamese citizens in the European country.

The round trip flights, arranged by Vietnamese authorities, the Embassy of Italy in Vietnam and relevant agencies amid the novel coronavirus disease (COVID-19) pandemic, were carried out by the national carrier this week.

It was part of the Vietnamese government's efforts to help foreign diplomatic missions in the country carry out their citizen protection duties and support the international community in the fight against COVID-19.

The Hanoi-Milan trip marked the first time Vietnam Airlines had operated a non-stop passenger flight on the nearly 10,000-kilometer route to Italy.

An experienced flight crew consisting of six pilots, 14 flight attendants and two technicians, all clad in protective gear, worked on the 12.5-hour flight.

Hot meals and magazines were not served while walking around was also restricted on the plane.

Fifty Italian citizens, who had been stranded in Vietnam due to COVID-19, were safely brought home on the flight.

The plane also carried four metric tons of medical supplies as a gift from the Vietnamese government and people to their Italian counterparts.

The gear were handed over to the Italian side after the flight touched down in Milan on Friday.

A number of Vietnamese citizens living in Italian regions hard hit by COVID-19 were brought home on the return flight which landed at Da Nang International Airport in the namesake central city on early Saturday morning.

Upon their arrival in Da Nang, all the Vietnamese passengers had their health checked and were immediately sent to concentrated quarantine areas as per Vietnam’s regulations on mandatory 14-day isolation for all incoming travelers.

Vietnam Airlines has operated similar special trips to bring home foreigners stranded in Vietnam to Germany, the UK and other countries in Europe.

It has also transported the Vietnamese government's medical aids to Laos, Cambodia and five European countries.

There were at least 358 foreigners stranded in Vietnam who wish to go home as of Friday, according to data pooled by the Vietnam National Administration of Tourism (VNAT).

They had been prevented from returning home by closed borders, airport shutdowns, canceled flights, or quarantine regulations.

The VNAT said it will work with related agencies to arrange special flights to transport these foreign nationals home as soon as possible.