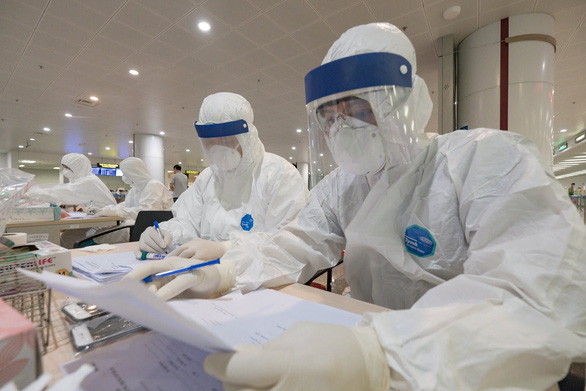 The seven are Russian experts who arrived in Vietnam earlier this month and were quarantined upon landing, the Ministry of Health said.

The ministry had confirmed five other cases, all Vietnamese returning from Russia and the U.S., on Wednesday morning. They were also sent to a quarantine center upon arrival.

The seven new patients are male Russians, aged 42-55, who work in the oil industry, the health ministry said.

They touched down at Tan Son Nhat International Airport in Ho Chi Minh City on board flight IO4405 on July 11.

They tested negative for the new coronavirus on July 13.

Their samples were taken again for testing on Tuesday and the Pasteur Institute in Ho Chi Minh City confirmed their positive results on Wednesday.

The seven patients are treated for COVID-19 at a hospital in Ba Ria-Vung Tau Province, about 100km southeast of the city.

Ten aboard the IO4405 flight, which carried 69 experts in total, had been confirmed as coronavirus patients. They are being isolated for treatment in Ba Ria-Vung Tau as well.

A total of 365 patients have beaten the virus in Vietnam, with zero deaths documented so far.

Vietnam has recorded no locally-transmitted infection for over three months in a row.

The country’s national tally will surely rise in the coming time, as the government has arranged a flight to bring 120 Vietnamese patients back from Equatorial Guinea on August 3.

Vietnam still seals its borders to foreign arrivals but experts and skilled workers are considered exceptions approved case by case by the central government.

Any entrant is subject to mandatory 14-day quarantine.