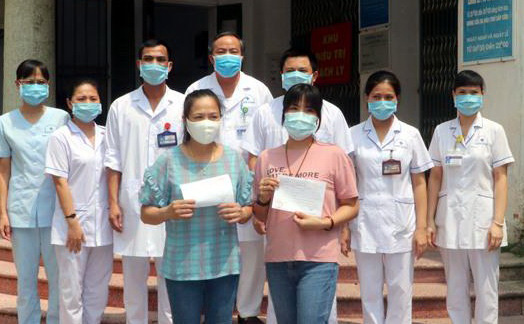 Only one local infection of COVID-19 has been confirmed in Vietnam over the past five days, with nine recoveries and one death reported on Thursday, according to the Ministry of Health.

The infected patient, a 72-year-old man, comes from northern Hai Duong Province and was announced on Wednesday. The source of infection is still unknown.

He is now isolated for treatment at the Dong Anh branch of the National Hospital for Tropical Diseases in Hanoi.

Vietnam has confirmed 1,046 coronavirus cases, including 691 domestic infections, since January 23, when the virus first struck the country.

As yet, 755 patients have beaten the virus while 35 have lost their lives, the majority in senior years and having suffered critical underlying medical conditions.

The health ministry did not include three fatalities in the death toll because they died after having tested negative for the pathogen at least three times.

A total of 551 local cases, mostly linked to Da Nang, have been logged since July 25, when the beach city recorded the first domestic infection after the Southeast Asian nation had gone through a streak of 99 days without any community transmission.

At the time of writing, Vietnam is quarantining 63,651 people who came into close contact with infected patients or entered the country from virus-hit regions.

The virus exists in the community so everyone should learn to “live with the epidemic” in order to both fight it and develop the national economy, the health ministry said.

Accordingly, the ministry advised people to wear face masks in public, keep a distance from one another, avoid gatherings, disinfect places and sanitize hands, and declare health status.