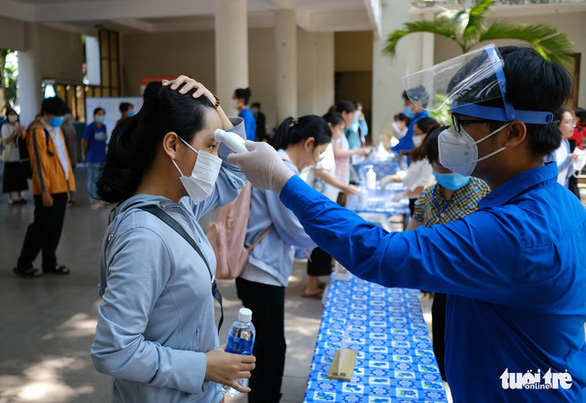 Vietnam on Monday logged zero local COVID-19 cases and announced the largest number of recoveries in a single day since the re-emergence of the virus late last month, according to the Ministry of Health.

This is the fifth successive day that Vietnam has reported no new domestic infections, the health ministry said.

The ministry announced 38 recoveries on Monday, including 19 in Quang Nam Province, 13 in Da Nang, five in Hai Duong Province, and one in Ho Chi Minh City.

Monday saw the largest daily number of recovered patients since the resurgence of the coronavirus in Da Nang on July 25, when the beach city detected the first community transmission after Vietnam had gone 99 days without documenting a single domestic case.

Sixty-six patients have tested negative for the pathogen one to three times, ready to exit hospitals.

Vietnam has confirmed 1,049 coronavirus cases, including 691 local infections, since the virus first hit in January, with 853 patients having recovered and 35 having died as of Monday night.

The health ministry did not count three casualties in the death toll because they died after having tested negative for the virus at leat three times.

A total of 551 domestic cases have been registered since July 25, most traced back to Da Nang.

The coastal city has recorded no locally-transmitted infections for a week, evidence that the virus has been kept at bay in the beach city thanks to aggressive contact tracing for over a month.

Social distancing was eased in Da Nang on Saturday, as the Ministry of Transport has restored the full operations of domestic flights, trains, passenger buses, and boats to and from the tourist hub.

The Civil Aviation Authority of Vietnam has proposed a plan to reopen commercial international air routes to China, Japan, South Korea, Taiwan, Cambodia, and Laos in the middle of this month.

Vietnam began barring entry to foreign nationals on March 22 and suspended international flights from March 25 in a bid to curb the spread of COVID-19.

Since then, charter flights to the country have only been arranged to bring in experts, skilled workers, and diplomats, and to repatriate Vietnamese citizens stranded in other nations and territories due to the pandemic.