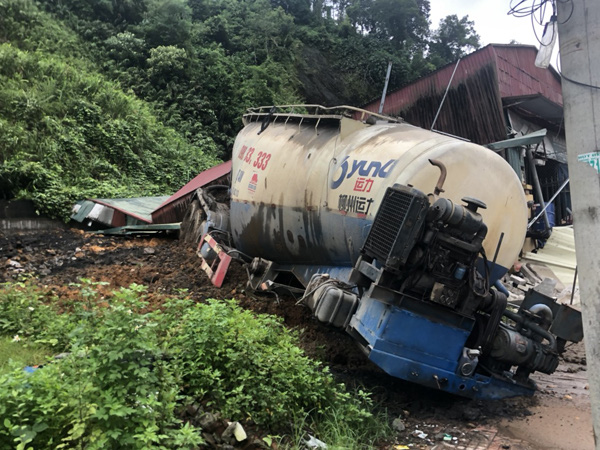 A downpour triggered landslides in the northern Vietnamese province of Ha Giang on Sunday, causing a local house to collapse, killing an eighth-grader and leaving several other properties damaged.

The news was announced in a quick report compiled on the same day by the Standing Office of the provincial Steering Committee for Disaster Prevention, Search, and Rescue.

A landslide that occurred in Viet Quang Town, Bac Quang District in Ha Giang at around 6:30 am on Sunday wrecked a local house, according to the report.

Nguyen Van L., 14, was sleeping inside the house when its walls collapsed on him, leaving the boy critically injured.

The victim was promptly rushed to the hospital by his family, but he later succumbed to his injuries.

The boy’s family members are natives of Vinh Phuc Province, around 236 kilometers from Ha Giang, who rent the house to live and run a small business.

After the incident, the district's authorities visited the victim’s family to express their condolences, assisted them in moving their belongings to a safe place, and gave them cash support of VND9 million (US$390).

Sunday's torrential rain was also reported to have knocked down another house in neighboring Dong Van District, officials said.

In Bac Quang District, three hectares of rice paddies in Tan Dien Village were submerged in water while 20 meters of water supply pipes for the two villages of Vinh Ngoc and Xuan Hoan were damaged in the land erosion triggered by the downpour.

A workshop in Viet Quang Town and a restaurant in Minh Thang Village in Bac Quang District were also wrecked by the landslides, with no casualties reported, official figures revealed.