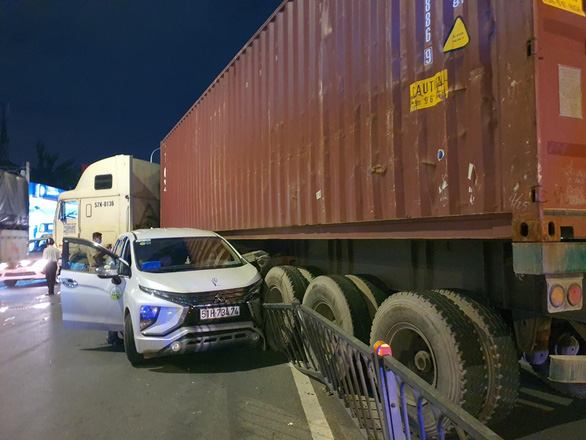 Many vehicles were seriously deformed after a tractor-trailer plowed into a road divider on Bach Dang Street in Ho Chi Minh City on Tuesday night.

No casualties were reported in the crash.

The accident occurred at around 11:00 pm near Ba Chieu Market in Binh Thanh District.

The truck driver admitted to local police officers that he had just driven out of Cat Lai Port in District 2 ten minutes before the crash happened.

At that time, he was driving on Bach Dang Street from the Hang Xanh intersection toward Ba Chieu Market.

The vehicle later hit the road divider, got out of control, and collided with a taxicab and a car that were running in the opposite direction.

As the accident took place near midnight, no injuries were reported but the three vehicles were seriously damaged.

The crash caused severe traffic jams, prompting local police to show up immediately to regulate traffic and investigate the case.

Local residents told Tuoi Tre (Youth) newspaper that the street section is dangerous at night as trucks usually drive fast on it.

They drive particularly fast before dawn to avoid a ban on large vehicles traveling on inner city streets.