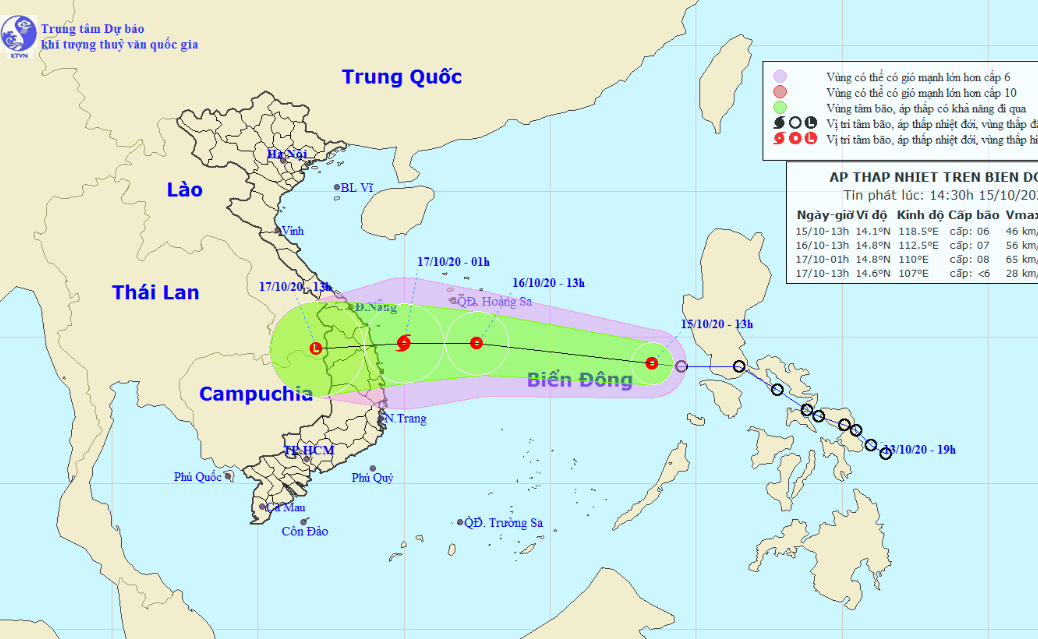 A new tropical depression entered the East Vietnam Sea on Thursday morning and may develop into a storm, causing bad weather conditions in central provinces.

The low-pressure system was located at 600 kilometers northeast of Song Tu Tay Island in Vietnam's Truong Sa (Spratly) archipelago as of 1:00 pm on Thursday, with winds at 40-50 km per hour, the National Center for Hydro-meteorological Forecasting reported.

It will gather more strength while traveling northwest in the next 24 hours and will be located at 220 kilometers south of Vietnam's Hoang Sa (Parcel) archipelago by 1:00 pm on Friday.

Wind speed will increase to between 50 and 60km an hour.

In the next 24 to 36 hours, the tropical depression will keep turning stronger and evolve into a storm, which is expected to be in the maritime area off localities from central Da Nang City to south-central Phu Yen Province on Saturday afternoon.

Due to the influence of the tropical depression, a tropical convergence zone, and a cold snap, heavy downpours will lash central Vietnam, especially north-central Ha Tinh and Quang Binh Provinces, from October 16 to 21.

Rain in the localities from Da Nang to Phu Yen will be at 200-300 millimeters.

Torrential rain may continue to batter central and south-central Vietnam after October 21.

From October 16 to 18, medium to heavy rain at 100-200 millimeters will dampen the Central Highlands.

Meanwhile, downpours in northern provinces will decrease in intensity from October 16.