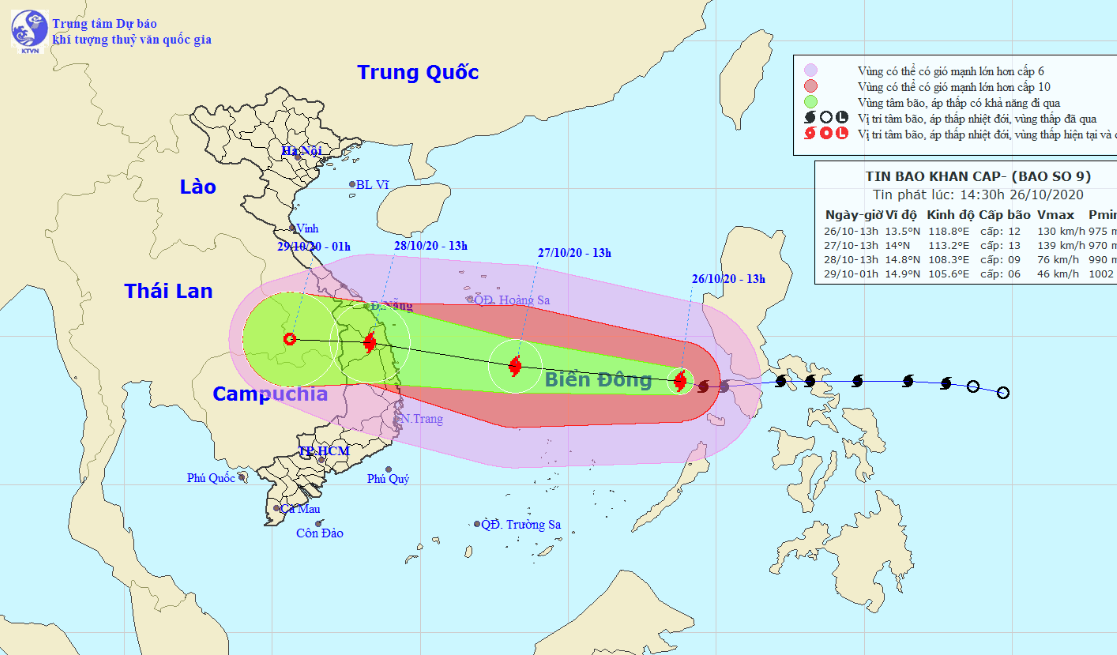 Tropical Storm Molave entered the East Vietnam Sea on Monday morning and is forecast to make landfall in central provinces on Wednesday, bringing heavy downpours to the region.

The storm, the ninth to hit Vietnam this year, was situated 550 kilometers northeast of Song Tu Tay Island in Vietnam's Truong Sa (Spratly) archipelago as of 1:00 pm on Monday.

Average wind speed was at 115-135km per hour, according to the National Center for Hydro-meteorological Forecasting.

It will travel northwest in the next 24 hours and will have been located 460 kilometers east of the central coastline by 1:00 pm on Tuesday, with wind speed increasing to between 115 and 150km an hour.

It will then weaken into a tropical depression, with winds at 40-50km per hour.

The storm will bring a torrential rainfall of 200-400 millimeters to the localities between north-central Thua Thien-Hue Province and south-central Phu Yen Province from October 27 to 29.

Rainfall will be down at 100-200 millimeters in the Central Highlands during this period.

From October 29 to 31, extreme downpours at 500-700 millimeters will batter north-central Nghe An, Ha Tinh, and Quang Binh Provinces.

Precipitation will hit 200-400 millimeters in north-central Quang Tri Province during this period.

Rough seas and high waves will occur in the northern and central sections of the East Vietnam Sea over the next days.