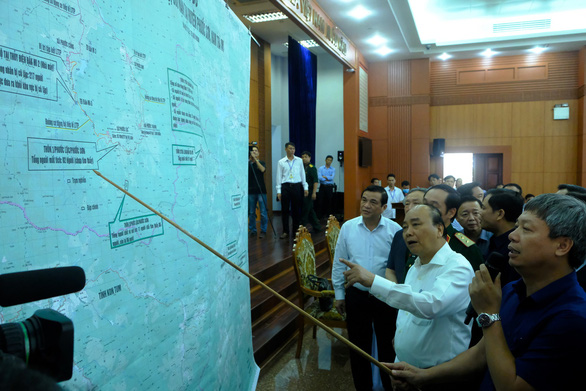 — Typhoon Goni, the world’s strongest storm so far this year, entered the East Vietnam Sea to become the tenth tropical storm to hit the country in 2020 at around 10:00 pm on Sunday, packing winds at 75-90km per hour as of 4:00 am on Monday.

— Although rainfall reduced for several hours and water coming from upstream areas was less than in the previous days, flooding remained in many localities in the low-lying region of the north-central provinces of Nghe An and Ha Tinh on Sunday afternoon, isolating thousands of houses.

— Rescuers were able to recover the bodies of two female students in Thanh Chuong District, Nghe An who drowned after floodwaters washed them away while they were cycling through a local stream on Sunday afternoon.

— During his inspection tour to Quang Ngai and Quang Nam on Sunday, Prime Minister Nguyen Xuan Phuc urged the authorities of the central Vietnamese provinces to make maximum efforts to support residents hit by recent storms and floods.

— With no new cases of COVID-19 confirmed on Monday morning, Vietnam has gone two straight months without a single community infection. The country’s patient tally stood at 1,180, including 1,063 recoveries and 35 fatalities, according to the National Steering Committee for COVID-19 Prevention and Control.

— The number of international tourists to Vietnam in October was up 7.6 percent from the previous month and down 99.1 percent from the same period last year due to the coronavirus pandemic, according to the General Statistics Office.

— The State Bank of Vietnam is drafting a circular regarding cashless payment which might allow domestic commercial banks and intermediary payment companies to cooperate with foreign intermediary payment firms to provide international payment services, the Vietnam News Agency reported.

-- — Nearly 2,000 students of Binh Phu High School in District 6, Ho Chi Minh City will not go to school on Monday and Tuesday as school staff resolve consequences from a whirlwind which swept through the campus on Saturday afternoon, unroofing and damaging several of its facilities.