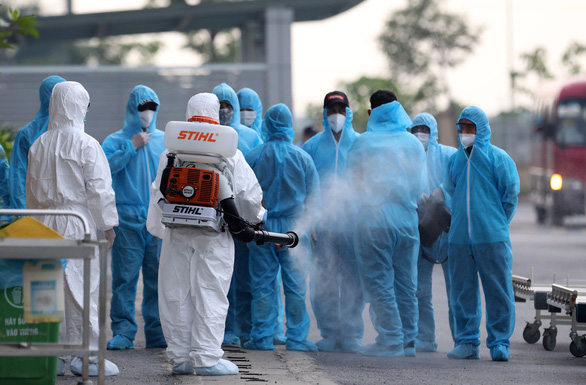 A recovered coronavirus patient has tested positive again nearly two months after he was discharged from a hospital in Hanoi, according to the municipal Center for Disease Control.

P.N.M., 21, is a student and he exited the hospital on September 17 after being cleared of the novel coronavirus, the center said.

He arrived in Vietnam from Russia on August 10 and had his second COVID-19 test return positive at the National Institute of Hygiene and Epidemiology in Hanoi on August 25, according to a report by the Center for Disease Control.

The patient was treated at the National Hospital for Tropical Diseases in the capital from August 25 to September 17.

He tested positive once and negative for six consecutive times at the hospital before his discharge.

The patient stayed home for two more weeks, wearing a face mask when he had contact with his family and girlfriend during this period.

He resumed his study at Hanoi University following the two-week home isolation, sitting two meters apart from his classmates during lectures. He went home after school and never visited public places.

On November 7, the student went to Hanoi Transport Hospital, where he was diagnosed with a viral fever. He was then allowed to go home for self care.

On Saturday, he went to the same hospital after developing a fever of 39 degrees Celsius.

His sample was taken for a real-time PCR test, the result of which came back positive for COVID-19 at the Vietnam National Children's Hospital in Hanoi on Sunday, almost two months after his hospital discharge.

The municipal Center for Disease Control has identified at least 25 people who had close contact with the student. Further contact tracing is underway.

Authorities are not sure if this is a reinfection, at a time when Vietnam has gone 75 days without any community transmission.

"In general, reinfection means a person was infected (got sick) once, recovered, and then later became infected again," the U.S. Centers for Disease Control and Prevention.

"Based on what we know from similar viruses, some reinfections are expected."

The Southeast Asian country has confirmed 1,281 coronavirus cases as of Monday morning, with 1,103 recoveries and 35 virus-related deaths, according to the Ministry of Health’s latest data.