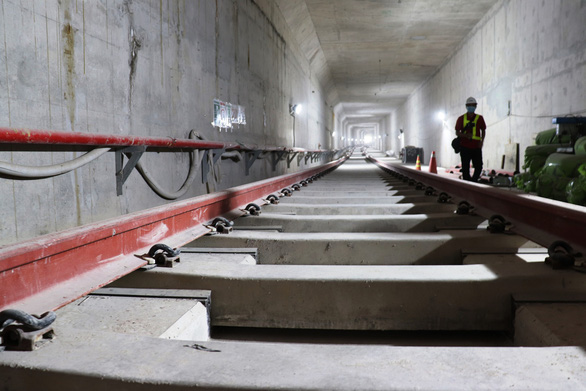 The Ho Chi Minh City Management Authority for Urban Railways (MAUR) said the construction of the Ba Son underground terminal, a part of the city’s metro line 1, is nearly complete.

The structure of the metro station consists of two stories with a combined length of 240 meters, average width of 35.5 meters, and height of 17 meters, according to a MAUR representative.

The contractors have completed backfilling the construction site to ground level and are preparing to restore the landscape in the excavated area.

Other structural items on the ground have also been erected, with exterior components the only things to be installed.

Construction of the underground terminal is estimated to be 84 percent done and slated for completion in the first quarter of 2021.

In the near future, the MAUR will work closely with contractors to ensure the progress of the project and prepare for the official train launch scheduled for late next year.

The Ba Son and the Municipal Theater stations have been connected with a 781-meter-long underground passage carved out with a giant tunnel boring machine.

The ground floor of the Ba Son station accommodates the hall, ticket machine, and ticket gates, as well as the information counter, while the platforms and rails are located on the upper floor.

From Ba Son, passengers can spot the transition of the underground metro rails to the elevated rail section of metro line 1.