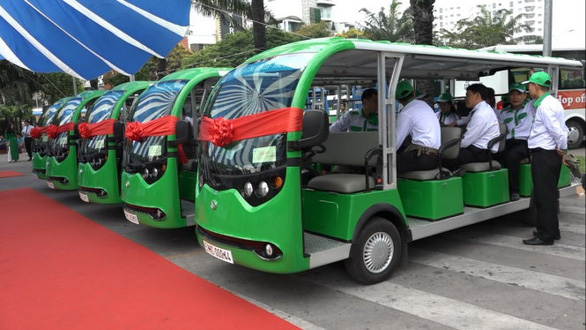 The Ho Chi Minh City Department of Transport has submitted a proposal on the protraction of electric bus testing.

According to the department, the city has piloted electric vehicles on three non-subsidized bus routes since 2017.

More specifically, the four-wheeled, 12-seater automobile models with electric motors are deployed to roam the city center, the Phu My Hung urban area, and the length of Nhieu Loc – Thi Nghe Canal.

During the trial phase, which was based on a proposal formulated by Mai Linh Group and City View Real Estate Company, several drawbacks in implementation were noted, namely the narrow test area, limited vehicles and low route frequency, which led to the failure to attract regular passengers and turn profitable.

On top of that, it is discovered that the commuting demand of urban dwellers peaks at nighttime, at weekends, and on holidays, but the current fleet of electric vehicles was not enough to cover these time frames.

Long charging time for the buses’ batteries, which ranges between six and eight hours per cycle, as well as the lack of mobile charging stations, and difficult maintenance due to costly spare parts also proved major issues for the operation of the electric bus system.

However, the trial phase also garnered positive responses for commuter service environmental-friendliness. It proved a great option for visitors looking for a cruise through the city.

Considering the results, the city’s transport authority suggested that the three-year trial phase of the urban electric bus system be extended until a comprehensive regulation framework is added to Vietnam’s Road Traffic Law.

With regard to legal progress, the agency urged the Ministry of Transport to quickly come up with a regulation framework for four-wheeled, electric motor vehicles, which must prescribe the range of operations and penalty statutes.