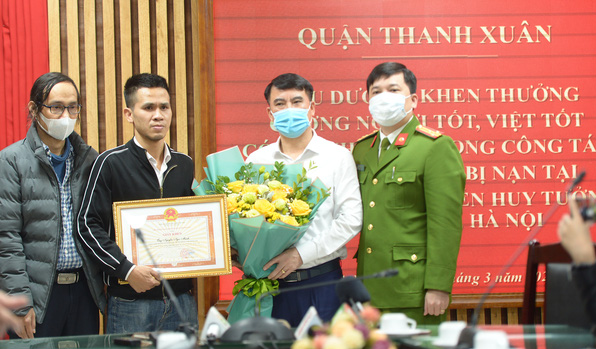 -- The pilot organization of urban administration in Ho Chi Minh City and central Da Nang City was discussed at a meeting of standing government members in Hanoi on Monday. The event was chaired by Prime Minister Nguyen Xuan Phuc.

-- The Ministry of Health recorded 11 local COVID-19 infections in the northern province of Hai Duong on Tuesday morning, raising the country’s tally to 2,472, with 1,892 recoveries and 35 deaths.

-- Prime Minister Nguyen Xuan Phuc on Monday afternoon issued a letter to praise Nguyen Ngoc Manh for saving a three-year-old girl who fell from the 12th floor of an apartment building in Hanoi on Sunday. The premier also awarded Manh a certificate of merit on the same day.

-- Leaders of northern Hai Duong Province have decided to end social distancing and lift lockdown on Chi Linh City and Cam Giang District from March 3 as the COVID-19 situation has been controlled well during the past 33 days.

-- The Hanoi People’s Committee on Monday announced that local restaurants and cafés would be allowed to reopen from 0:00 on Tuesday, but strict COVID-19 prevention and control measures would have to be taken at these venues.

-- The Ministry of Public Security confirmed on Monday it had initiated legal proceedings against the incumbent and former directors of the health department in the Mekong Delta city of Can Tho for violations of bidding regulations.

-- Vietnam’s export value of aquatic products reached US$405 million in February, spurring the figure in the first two months of 2021 to over $1 billion, up by 2.2 percent year-on-year, according to the Vietnam Association of Seafood Exporters and Producers.

-- From February 27 to March 31, passengers of domestic flights operated by budget carrier Vietjet will receive a special gift of 20kg checked baggage in addition to 7kg hand luggage for free.