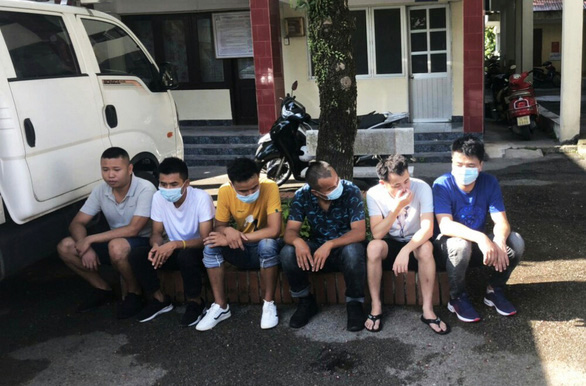 Authorities in An Giang Province, located in the Mekong Delta region, have constantly uncovered cases of illegally transporting Chinese citizens from northern border areas all the way to the southern part of Vietnam to enter Cambodia.

The Steering Committee for COVID-19 Prevention and Control in An Giang on Monday evening said that they had received the reports from Tan Chau Town and Chau Doc City about 34 cases of Chinese people making illegal entry into Vietnam.

All of the 34 border jumpers have been quarantined and tested for COVID-19 as per local regulations.

During a patrol on March 7, police in Chau Doc City also discovered a vehicle carrying 13 Chinese people trying to cross the border into Cambodia.

The 13 Chinese people later admitted that they had departed from the city of Nanning in China, crossing mountain roads to the border area near Vietnam before unlawfully entering the Southeast Asian country through a trail near the Huu Nghi Border Gate in northern Lang Son Province.

They were transported to Ho Chi Minh City and transferred onto different vehicles before being detained at an eatery in Chau Doc City at around 3:00 am on that date.

In another case, local authorities in Tan Chau Town detected two vehicles carrying 14 Chinese citizens in the direction from Chau Doc City to Ho Chi Minh City at around 9:00 pm on March 6.

All of the 14 Chinese, together with their two drivers, were taken to a local medical center for quarantine as per regulations on coronavirus prevention.

Officials in Tan Chau Town, however, have yet to clearly track the details of their journey because the border jumpers were uncooperative.

Prior to that, at around 9:00 pm on March 4, police in Chau Doc City, in collaboration with their counterparts in An Phu District, discovered a car transporting seven Chinese citizens, including two women and five men, making an attempt to cross the border into Cambodia.

According to the Chinese citizens, they had been given instructions to illicitly enter Vietnam via a trail near the Huu Nghi Border Gate in Lang Son Province at around 9:00 pm on March 1 before being picked up by a seven-seater car and then taken on a sleeper bus to Ho Chi Minh City, where they continued to catch another seven-seater car to Chau Doc City.

The police officers of Chau Doc City stopped them in the middle of their journey near the Con Tien Bridge.

The constant detection of the Chinese border jumpers has alleged that there is a large-scale ring helping Chinese citizens travel through trails and paths to Vietnam and take transit cars or passenger buses to Cambodia.

The Steering Committee for COVID-19 Prevention and Control in An Giang has thus instructed grassroots administrations to continue keeping their vigilance and promoting the organization of contact tracing in every commune, ward, and town.