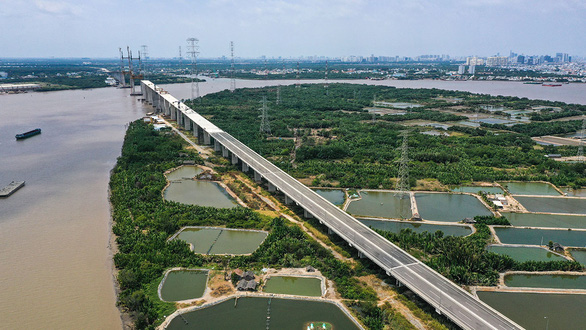 Infrastructural development is a hot topic with works in the Mekong Delta appearing on the agenda of this week’s National Assembly (NA) deputies.

Minister of Transport Nguyen Van The provided Tuoi Tre (Youth) newspaper with the latest information regarding a series of upcoming traffic projects in southern Vietnam during an interview on the sidelines of the NA's sitting that concluded on Thursday.

How will the transport infrastructure be developed in the southern region, and in particular the Mekong Delta region, in the short and long term?

There are many great plans in the works but how they proceed will depend on various ministries, the national government, and the NA. I’d like to discuss those that are currently within reach of success.

In the Mekong Delta, the Trung Luong - My Thuan section of the Ho Chi Minh City - Can Tho Expressway is expected to be completed this year. This section, the first part of the expressway project, is currently paved and the investor has had enough capital for project completion.

Work on the My Thuan 2 Bridge, which accounts for the expressway’s second section, has started and its current progress nearly meets expectations. The construction is expected to be complete in 2023. The NA has earmarked VND5 trillion (US$215 million) for the bridge.

The third section stretches from the My Thuan Bridge to Can Tho City and will carry a total cost of VND4.8 trillion ($207 million). Currently, three construction and installation packages are underway and the financial sources for these are within reach. From now until 2022, we will continue working toward the completion of the expressway section from My Thuan to Can Tho. The entire Ho Chi Minh City - Can Tho Expressway will be finished in 2023.

Many transport infrastructure development plans have been studied and the prime minister has also mentioned them, but there remains some hesitancy about some of the proposals. After the second session of the coming 15th NA agrees on the final list of such traffic works in October, I will provide the press with their specifics.

The Ben Luc - Long Thanh Expressway, one of the important traffic routes in the southern region faces a variety of problems. How are these problems being resolved?

This expressway needs an investment of VND2.2 trillion ($94.9 million), of which VND2 trillion will be spent on site clearance and the remainder will be used for construction and installation. Having discussed this project many times, the government will certainly come to a conclusion on how to proceed, however, a specific time frame will be subject to the new government's mechanism.

What are the difficulties facing transport infrastructure development in the southern region?

The southeastern region is one of the largest economic hubs in the country and has been developing relatively well for quite a while. However, in the past one or two years, the region’s progress has slowed down for several reasons, one of which is transport infrastructure.

Right now it is difficult for goods to reach major ports, particularly Cai Mep - Thi Vai [in Ba Ria-Vung Tau Province], because the traffic route on National Highway 51 leading to the port is overloaded. Meanwhile, the traffic coming in from the Mekong Delta is often congested due to a lack of bypasses near Ho Chi Minh City.

To fix this, the area needs to focus its resources on completing several major projects, including Belt Road No. 3. I hope that a funding source will be secured during this tenure of the new government so that the project can be completed as quickly as possible.

Regarding Belt Road No. 4, as it contains several important sections, including the stretches running from Long An to the Ho Chi Minh City - Can Tho Expressway, Hiep Phuoc Port [in Ho Chi Minh City], and Long An International Port [in the eponymous province], efforts should be made to secure investment.

Additionally, some important centripetal highways and motorways must be built. These include a route for connecting Tay Ninh Province and Cambodia and another route alongside National Highway 22 for linking Ho Chi Minh City to the Moc Bai border gate in Tay Ninh.

As these are very important centripetal expressways running to Beltways 3 and 4 in Ho Chi Minh City, the central government is seeking resources and solutions to make them available in the near future.

Upon completion of these routes, inter-regional traffic will be improved, contributing to a boost in the socio-economic development of Ho Chi Minh City and surrounding localities.

In your opinion, what are the obstructions to traffic in the Mekong Delta?

The Mekong Delta faces several obstructions, of which the biggest is the absence of deep-water ports. This means that cargoes from all 13 provinces and cities in the region, particularly the seven provinces on the west of the Hau [Back] River, must be transported to Ho Chi Minh City, which is both time-consuming and costly.

To solve this issue, the government will adjust its traffic planning to facilitate the mobilization of resources and to build a deep-water port in the region, expected to be located in Tran De District, Soc Trang Province.

Afterward, an expressway will be built to connect the port to Can Tho City and An Giang Province in the center of the region, as well as with Cambodia. Another expressway is also needed for the route from Can Tho to Ca Mau Province.

The above traffic systems are essential for the region to develop its transport services and create a connection between air and maritime transportation. The government, therefore, will try its best to build these important routes as soon as possible.

In addition, it is necessary to consider building railways. The current demand for travel from southeastern localities and Ho Chi Minh City to the Mekong Delta and vice versa is considerable, so if a railway is created to link Ho Chi Minh City and Can Tho, it will certainly help reduce transportation costs and ease traffic pressure on highways.