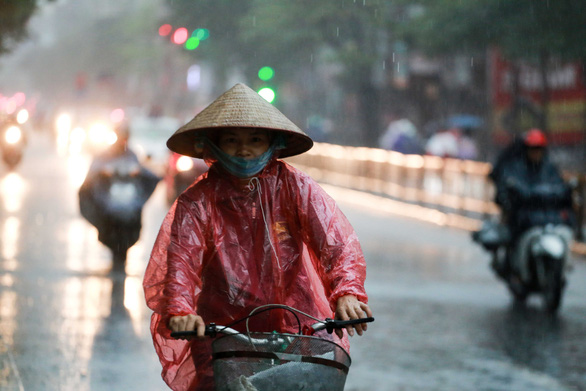 Torrential rain is forecast for all weekend in Hanoi, surrounding areas

Hanoi and its environs would see heavy precipitation on Saturday and Sunday, the National Center for Hydrometeorological Forecasting said.

A strengthened cold front in tandem with a convergence located 5000 meters above sea level brought heavy rain to multiple locales of northern Vietnam, including Lao Cai Province’s Sa Pa City which reported 22 millimeters of rainfall, or Lang Son Province that saw 40 millimeters between 7:00 am on Friday and 1:00 am on Saturday, according to the center.

It was forecast that the convergence and cold front will cause heavy rain of 80-120 millimeters per instance, as well as thunderstorms in northern provinces.

The downpours would start in late Saturday night and were expected to last till Monday.

Central provinces will also see chances of rain and thunderstorms, sleet, and gales, with western mountainous areas to brace for heavier downpours.

Hanoi would likely encounter heavy rain and thunderstorms in the late hours of Saturday, with cold weather and chances of sleet and strong wind to ensue.

The Central Highlands and southern provinces are expected to see sunlight during the day, plus downpours in the evenings from Saturday to Wednesday.

The southern part of the Central Highland is told to be ready for torrential rain and thunderstorms during the evenings between Monday and Wednesday.

According to the forecasting authority, thunderstorms and downpours are poised to intensify on April 22 and 23, accompanied by thunderstorms, sleet, and gales.

Addressing the risk of adverse weather phenomena, the Central Steering Committee for Natural Disaster Prevention and Control required provincial and city authorities to keep an eye on alerts and forecasts to promptly inform local residents, which would help limit the possibility of human and asset damage.

Lower-level authorities, most importantly urban areas and residential quarters, are told to prepare themselves for inundation in their areas.