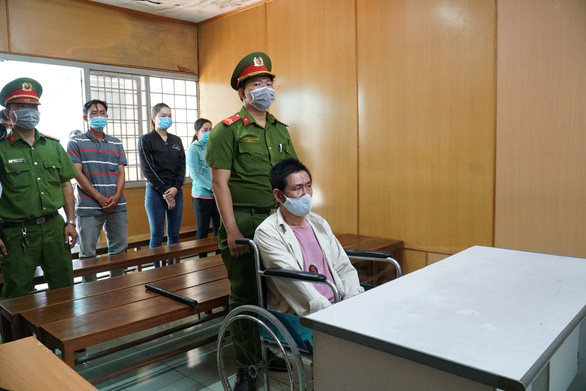 A Vietnamese court has sentenced a man to death for setting fire to a rented room in Ho Chi Minh City, killing a woman and her two nephews in June 2020.

The People’s Court of Ho Chi Minh City on Friday sentenced 54-year-old Phan Van Quang, a native of Tien Giang Province, to death for murder and to two years in prison for property destruction.

Quang was brought to the court in a wheelchair as one of his legs had been amputated due to gangrene while he was in detention.

The other leg was seriously burned during his arson.

As shown in the indictment, Quang got acquainted with the woman, D.T.D., in April 2019 when he wholesaled fruits to her.

D. lived with her daughter and her two nephews, aged 13 and 15, in their rented room in Ho Chi Minh City’s Binh Tan District.

After more than one year of relationship, Quang and D. fell into conflict since the woman often scold him and changed her attitude toward him.

Thinking that D. had a relationship with another man, Quang felt resentment against her and such negative feeling drove him to commit the crime.

In the evening of June 11, 2020, D. cursed and beat Quang with a chair when he returned to the rented room from a market.

The man then left but he returned to the room at 1:00 am the following morning and set the room on fire using three liters of gasoline.

The fire killed D. and her two nephews inside the room, and destroyed a motorbike.

At that time, D.’s daughter had gone out to sleep at a neighboring house, so she fortunately escaped the fire.

Quang fled the scene after his crime and hid at many places before being arrested in mid-June in Cho Gao District, Tien Giang Province, which borders Ho Chi Minh City.

At the court, Quang admitted the entire crime and accepted a compensation of VND1.3 billion (US$56,400) to the relatives of the victims.

However, he said that such compensation could be made only when he could contact his family again, since he had lost all contact with his relatives since he was arrested.

The trial panel concluded that Quang deserved the death sentence since he had committed an extremely serious crime, killing three people including two minors.