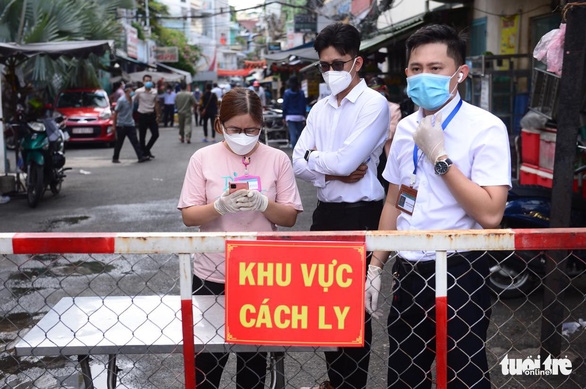 The Ministry of Health has not documented these patients so they are considered suspected cases.

Eight of the patients were traced back to Revival Ekklesia Mission, a Christian congregation based in Go Vap District, the HCDC said in a report.

This religious mission was given a practicing permit in 2006, Nguyen Duy Tan, head of religious affairs at the Ho Chi Minh City Department of External Relations, said on Thursday.

The remaining four cases include a married couple who visited Hoan My Hospital in Phu Nhuan District on Thursday, their three-year-old boy, and the pregnant wife’s female colleague at the VIB bank branch in District 7.

Contact tracing and targeted lockdown have been underway since the detection of the suspected cases.

Twenty-nine of the patients are the mission’s followers while seven were their direct contacts, the HCDC elaborated.

Forty-four patients, including the said 36 infections, have been registered in Ho Chi Minh City during the current fourth wave.

Vietnam’s daily local infections rose by 80 cases as of Friday noon, the health ministry said in a midday update. The agency will give another update at 6:00 pm.

One of the patients, reported in the Mekong Delta province of Long An, works as a cook at Sheraton Saigon Hotel & Towers in District 1, Ho Chi Minh City.

This cook came into direct contact with another cook at the hotel who had been confirmed as a COVID-19 patient on Thursday.

Vietnam has detected 3,335 domestic infections in 31 provinces and cities since April 27, when the fourth wave broke out in the Southeast Asian country, according to the Ministry of Health's data.

The nation has recorded 6,396 cumulative COVID-19 patients since the virus first emerged in it on January 23, 2020.

Recoveries have hit 2,896, including 43 announced at noon on Friday, while 47 virus-related fatalities have been documented so far.

Health authorities have administered 1,038,741 coronavirus vaccine shots to medical staff and other frontline workers since Vietnam rolled out its mass inoculation on March 8.

A total of 28,529 people have been given two doses of the vaccine.