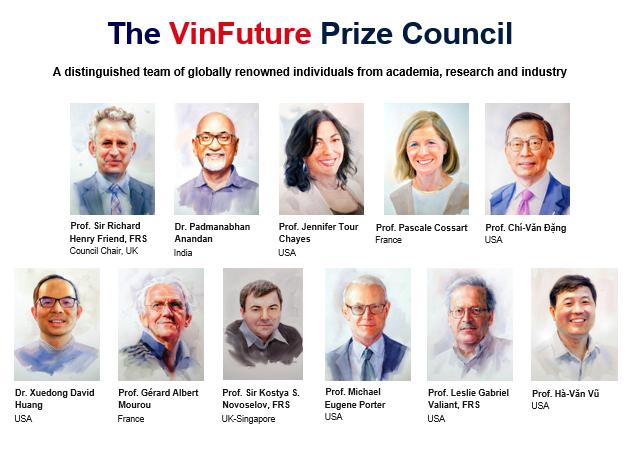 Vietnam’s VinFuture Foundation announced on Thursday that it has officially closed the nomination portal for the 2021 VinFuture Prize, recording nearly 600 nominations from more than 60 countries across six continents.

The result has exceeded expectations, particularly for a newly established sci-tech prize opened for nominations less than four months ago, affirming the global scientific community’s favorable response to VinFuture’s mission of serving humanity.

VinFuture has attracted prominent scientists and the world’s leading research and academic institutions as well as innovators from developing countries.

Nearly 100 nominated projects belong to the world’s top two percent most-cited scientists, many of whom are laureates of prestigious awards such as the Nobel Prize, the Breakthrough Prize, the Tang Prize, the Japan Prize, and others.

While most of the candidates are from North America (31.6 percent), Asia (33.9 percent), and Europe (21 percent), VinFuture has received significant nominations from scientists in Oceania, Latin America, and Africa.

In particular, female scientists were nominated in all four prize categories, accounting for 34.3 percent of the total nominees.

All share the same aspiration of doing science for humanity, offering highly applicable and practical solutions for improving the quality of people’s lives.

These positive results are attributed to the strong support of prominent individuals and organizations, world-renowned scientists, as well as distinguished professors and experts from the Prize Council and Pre-Screening Committee who have endorsed the VinFuture Prize among the global scientific community.

Therefore, just four months after the initial call for nominations, the Prize has attracted nearly 1,200 nominators from the world’s most reputable academic circles.

“We are very pleased to see that the VinFuture Prize, while being the first of its kind from Vietnam, has been received so warmly by the global scientific community,” said Professor Thuc-Quyen Nguyen, University of California, Santa Barbara, co-chair of the VinFuture Prize Pre-Screening Committee.

“Particularly, many prominent scientists have been nominated for the Prize.

“They have made truly meaningful contributions to the future of humanity by tackling global challenges from infectious diseases, environmental pollution, climate change to shortage of natural resources.

“The nominations for female scientists, scientists from developing countries, as well as pioneers in emerging fields are also very impressive.”

In addition to the significant number of nominations and the prestige of nominated scientists and researchers, the VinFuture Prize has also seen an impressive diversity and depth of areas that address humanity’s common challenges after its inaugural call for nominations.

A large number of nominated innovations focus on the prevention and treatment of infectious diseases on a global scale, sustainable poverty elimination, smart agriculture, clean food supply, renewable energy, and the application of artificial intelligence and digital technology to education and life.

Going forward, nominations will be reviewed by a twelve-member Pre-Screening Committee of prominent scientists and experts from various disciplines and countries who will present the shortlisted candidates to the Prize Council in August 2021.

Laureates will then be selected independently by the Prize Council comprising eleven distinguished individuals in academia, research, and industry with significant achievements and contributions to advancing human progress.

The VinFuture Grand Prize will be awarded to innovators whose work has been proven to create the largest impact on humankind.

It is also one of the world’s largest prizes for science and technology to date, valued at US$3 million.

Additionally, three special prizes will be awarded to innovators from developing countries, female innovators, and innovators with outstanding achievements in emerging fields, each worth $500,000.

The laureates of the 2021 VinFuture Prize will be announced on December 20, 2021 and the official awards ceremony will be held in Vietnam on January 20, 2022.

The VinFuture Prize is a global science and technology prize founded by Pham Nhat Vuong, chairman of Vingroup, and his wife Pham Thu Huong to recognize groundbreaking scientific discoveries and technological inventions proven to create, or having the potential to create, better changes in the everyday lives of millions of people and foster a sustainable living environment for future generations.