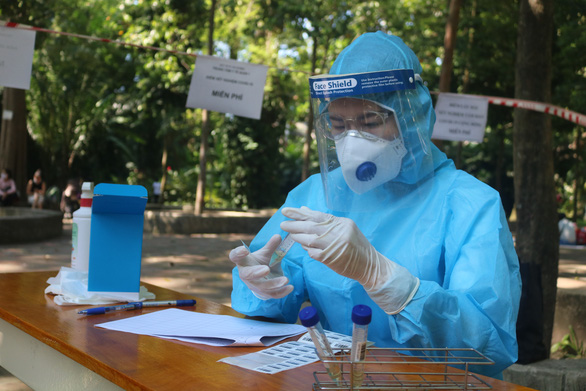 The novel coronavirus has spread to all districts of Ho Chi Minh City, which is considering an extension of social distancing measures after two weeks of implementation.

Thu Duc, a district-level city, and the other 21 districts have all detected COVID-19 infections as of Monday, with Can Gio District on Sunday logging the first-ever case in the ongoing fourth wave that has raged in Vietnam since late April.

The Ministry of Health confirmed 30 new cases in Ho Chi Minh City on Monday morning, including three in District 5, seven in Go Vap District, 15 in Hoc Mon District, one in Cu Chi District, and four in Binh Tan District.

The ministry announced the city’s biggest-ever daily increase of 95 local cases on Sunday, when 53 fully vaccinated employees at the Ho Chi Minh City Hospital for Tropical Diseases, a major COVID-19 treatment center in southern Vietnam, were diagnosed with the respiratory disease.

Health authorities have basically broken the city’s largest infection chain linked to Revival Ekklesia Mission, a Christian congregation based in Go Vap, with about 450 patients traced to it, said Nguyen Tan Binh, director of the municipal Department of Health.

But other chains have emerged because the virus may have silently spread in the community, Binh added.

The health department recommended on Monday that the city extend the enhanced social distancing measures having put in place since May 31 by two weeks to stall community transmission.

City authorities are set to make the final decision later the same day.

Vietnam has registered 7,424 domestic cases in 39 out of its 63 provinces and cities since the fourth wave erupted on April 27, according to the health ministry’s data.

Bac Giang Province in the north is leading the fourth round’s tally with 4,068 patients, followed by northern Bac Ninh Province with 1,352, Ho Chi Minh City with 819, and Hanoi with 459.

The Southeast Asian nation has reported 10,630 cumulative infections as of Monday morning, including 3,998 recoveries and 59 deaths.

It administered 43,222 AstraZeneca vaccine shots to medical staff and other frontline workers on Sunday, taking the total to 1,498,323 doses since inoculation was rolled out on March 8.