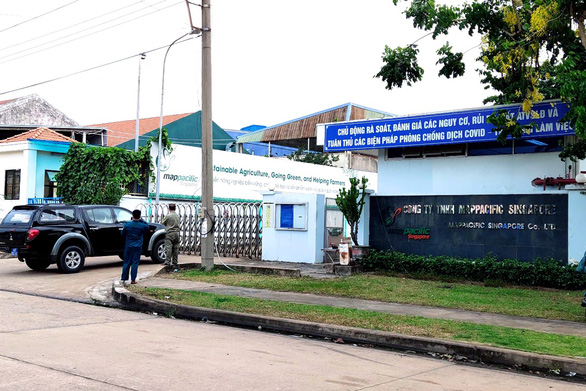 A Singaporean-owned company in an industrial park in Vietnam has been closed temporarily after its sales head tested positive for the coronavirus once, a local disease control agency has reported.

N.T.D., 38, head of sales at Map Pacific Singapore Co. Ltd., situated in Amata Industrial Park in southern Dong Nai Province, has tested positive for the virus for the first time, the provincial Center for Disease Control said on Tuesday.

On June 11, after being identified as a direct contact of his cousin who had contracted the virus, D., hailing from Ho Chi Minh City, and his 10-member family were sent to a centralized quarantine facility in the provincial capital city of Bien Hoa, where he tested positive for COVID-19 a day later.

D. had had his samples taken for the second test and the result was pending, said Diep Thai Binh, director of the center.

Authorities have temporarily suspended the company’s operations for epidemiological investigation and disinfected its premises.

The temporary lockdown may be lifted when all the direct and indirect contacts of the case have been traced and when the company has taken measures to ensure safe operations, said the official.

This suspected infection, which has not been confirmed by the Ministry of Health, was detected amid the increasing COVID-19 spread in Vietnam, affecting 40 cities and provinces since late April.

The Ministry of Health on Tuesday noon confirmed 118 new cases nationwide, all domestically detected, of which 69 were logged in Bac Giang Province.

Since April 27, when the pandemic’s fourth wave started in Vietnam, 7,787 infections have been recorded across the country.