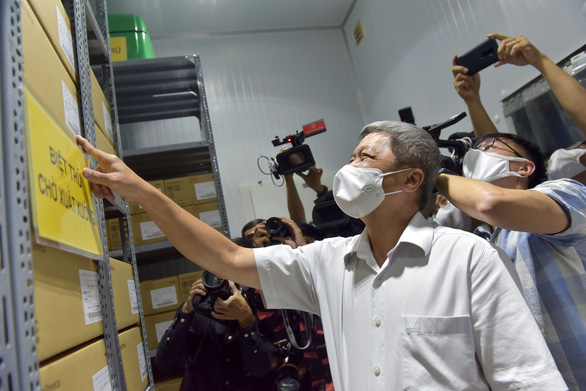 -- Vietnam's patient tally rose to 12,231 after the Ministry of Health announced 81 new cases on Friday morning, including 60 in Ho Chi Minh City and 21 in northern Bac Giang Province. The number of recoveries has reached 4,653 while 61 patients have died so far. Tay Ninh Province reported one virus-related death on Thursday but the health ministry has yet to record it.

-- Twenty-six coronavirus infections were detected at a factory of Trung Son Corp in Binh Tan District, Ho Chi Minh City, local authorities said on Thursday. They had sent 136 of the factory's over 800 workers to centralized quarantine on Wednesday.

-- Nguyen Duy Linh, a former senior intelligence official of the public security ministry, has been arrested on charges of taking bribes, a source told Tuoi Tre on Wednesday.

-- Vietnam's state-run utility EVN signed a US$1.3 billion deal in Hanoi on Thursday with Japanese and South Korean partners to implement a package of the Quang Trach 1 thermal power plant project in Quang Binh Province.

-- "An early Memphis Depay penalty and a Denzel Dumfries goal gave the Netherlands a convincing 2-0 victory over Austria on Thursday and a place in the Euro 2020 last 16 as Group C winners," Reuters reported.

-- Belgium’s poor performance in the first half of Thursday’s Euro 2020 Group B victory over Denmark was down to the loud and passionate home crowd at the Parken Stadium which created an intimidating atmosphere, Reuters quoted Belgium coach Roberto Martinez as saying after the clash in Copenhagen.