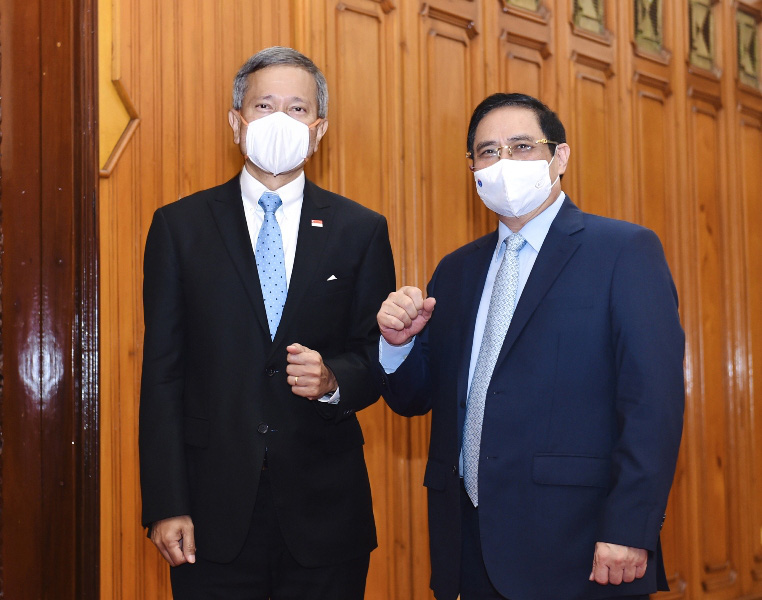 -- Singaporean Minister for Foreign Affairs Vivian Balakrishnan joined talks with Vietnamese State President Nguyen Xuan Phuc and Prime Minister Pham Minh Chinh in Hanoi on Monday during his visit to Vietnam from June 20 to 23, according to the Vietnam News Agency.

-- The Hanoi People’s Committee has allowed dine-in service and barbershops to resume operations from 0:00 on Tuesday but with several restrictions to minimize the risk of COVID-19 transmission.

-- As of 5:00 pm on Monday, Ho Chi Minh City had had a total of 469 locked-down areas in Thu Duc City and 19 districts, according to the city’s Center for Disease Control.

-- Authorities in the northern city of Hai Phong on Monday agreed to offer VND10 billion (US$435,000) worth of financial aid to help Ho Chi Minh City fight against the COVID-19 pandemic.

-- A 52-year-old man from the Mekong Delta province of An Giang was sentenced to 15 years in prison on Monday for raping a six-year-old girl in mid-March.

-- The Hanoi People’s Court on Monday sentenced a 32-year-old man to 12 years in jail for murder after he had brutally attacked a thief with a machete and critically injured him last year.

-- Border guard officers in the north-central province of Quang Binh confirmed on Monday they had arrested a Laotian man for transporting 20 bricks of dried cannabis to Vietnam.

-- The export revenue of Vietnam’s garment and textile sector surged 21.2 percent year on year in the first five months to about $15.2 billion, according to the Vietnam Textile and Apparel Association.