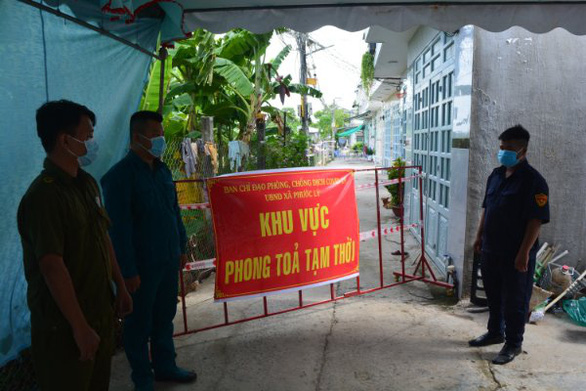 Eighteen people in the same hamlet of the Mekong Delta province of Long An tested positive for the novel coronavirus after one of them had contracted the virus from an individual from Ho Chi Minh City, the local epidemic control agency has reported.

All the infections were found in Phuoc Ly Hamlet of Can Giuoc District, representing the largest cluster of COVID-19 cases ever detected in the province, the Long An Center for Disease Control said on Thursday.

The detection was made after the center was notified by its Ho Chi Minh City counterpart that a person living in Phuoc Ly had caught the virus from another from the city.

A cross-infection could have taken place among these people, the center said.

All of the 18 COVID-cases have been sent to a health facility for isolation and treatment, while their 29 direct contacts have been put into centralized quarantine.

Relevant agencies are urgently disinfecting the affected areas and have deployed other epidemic prevention measures to curb the spread of the virus.

Local health authorities also took samples from 700 others in the hamlet for COVID-19 testing, all of whom have received negative results.

On Thursday morning, one more coronavirus positive case was detected in the province's Duc Hoa District.

The new infection case is a 31-year-old saleswoman for a plastics company located near her home in Duc Hoa Ha Commune.

On June 16, the woman came into direct contact with a driver of the same company, who was later confirmed as a COVID-19 patient by Ho Chi Minh City’s health authorities.

The Ministry of Health on Thursday noon recorded 127 new COVID-19 patients, including 126 domestic cases and one imported infection, of which 75 were detected in Ho Chi Minh City, which recently topped the country in daily new cases.

Vietnam has documented a total of 14,116 patients, including 5,684 recoveries and 72 deaths, since the pathogen first emerged in it in early 2020.

Since April 27, when the pandemic’s fourth wave appeared in Vietnam, 10,820 coronavirus cases have been recorded nationwide.