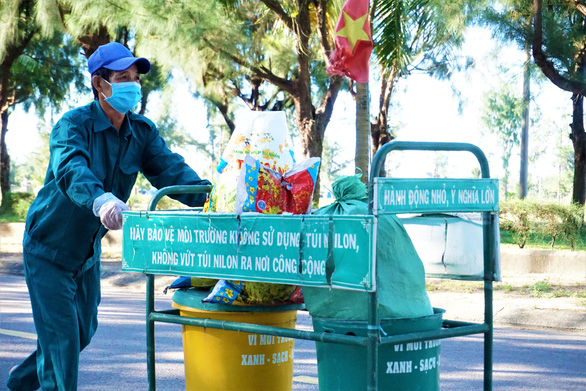 Meet Thuong, a beloved trash picker in Vietnam's Hoi An

A wrinkled face, sunburned skin and all smiles pushing his trash cart, Nguyen Thuong, 61, has become a special piece of Hoi An Ancient Town in Vietnam's Quang Nam Province.

People call him 'Crazy' Thuong as he does things like no other – wandering around town picking up garbage at night.

For half a decade, he has roamed into every corner of the touristic town to clean streets and help the locals run errands for free.

A stroke suddenly put an end to Thuong’s career as a chef at a hotel in Hoi An five years ago.

After a long treatment, Thuong was discharged from a hospital with ears unable to hear and limbs paralyzed. At home, he tried to rehabilitate and started walking again slowly.

In the first days, it was a terrible pain for every step forward and he kept falling down while taking efforts to stand up.

“Despite pains and difficulties, I pull out all my last strength to do exercise and regain my capability of walking,” Thuong recalled.

When he finally overcame the incident, Thuong started thinking about how to pay it forward to show his gratitude for being alive again.

Seeing his hometown engulfed by plastic bags, he came up with an idea of jogging and picking up trash, simultaneously.

Many tourists and residents found him strange. Some even got angry when he reminded them not to litter.

“They called me insane," said Thuong.

"My family asked me to stop yet I was determined to do something.

"I just wanted to show my gratitude not because I lost my mind.”

Thuong continues the good deeds in silence, no matter what the weather is like.

Recalling the most difficult time in her life, Le Thi Bay – Thuong’s wife – lost count of the times she cried knowing her husband was called crazy.

“I was morose. I tried to prevent him yet he told me he felt better by going out,” said Bay.

“However, he was the one who assured me that ‘you should just ignore what they say. I want to contribute to the community, don’t worry’."

Nguyen Xuan Phuong – Thuong’s daughter – could never forget calls and messages at midnight telling her that her father was 'severely insane.'

“Negative words about him hurt my family so badly," Phuong said.

"We tried to stop him but he resisted.”

Finally, they learnt to understand Thuong’s determination and switched to supporting him, advising him to change working hours to the early morning, from 5:00 to 8:00 am.

The man’s good deeds have changed how local residents think about him.

Using the savings from selling metal scraps, Thuong bought a cart to collect and deliver more garbage to a landfill.

On the cart, he painted slogans of environmental protection with a simple aim to call for social awareness of classifying trash and reducing the use of plastic bags.

Small changes have been witnessed with more people supporting Thuong, simply by putting garbage into trash bins or keeping the roads in front of their houses clean.

Although he is not in good shape and the treatment costs his family dozens of millions of dong per month (VND1 million=US$43), Thuong refuses to receive an allowance from local authorities.

The man said he pledged to himself to do good for the community and would continue until he could no more.