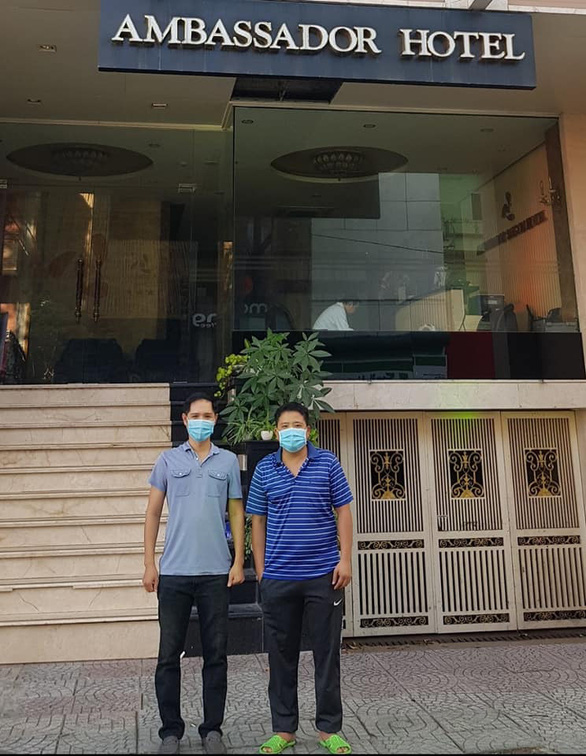 Two hoteliers in Ho Chi Minh City have offered to house the needy as well as frontline workers in their joint venture Ambassador Hotel as a gesture of support for the city’s uphill battle against the coronavirus.

Located in the downtown neighborhood of District 1, Ambassador Hotel is dedicating its whole lodging area — with 61 double-bed units — to disadvantaged working-class people, as well as doctors, police officers, reporters, soldiers, and volunteers who are combating COVID-19 on the frontline.

Dubbed the ‘community hotel,' the charitable initiative was started by Nguyen Tuan Khoi, 38, and Dinh Quoc Huy, 35, the co-owners of the hotel, who wish to do their part in the city’s common effort to push back the epidemic.

A household name in the philanthropist community, Khoi has launched many efforts over the past years to encourage blood donation, sell fresh produce for vulnerable farmers, and distribute food to the needy.

Discussing with Tuoi Tre (Youth) newspaper, Khoi revealed that he has organized community fridges to take care of the coronavirus-hit people in Ho Chi Minh City since the epidemic’s impact in Vietnam starts to take a toll in early 2020.

As the world starts to put up a fight with the disease, Khoi noticed the emergence of the ‘community hotel’ model in the United States, where local authorities rent out hotels and provide them as free lodgings to the homeless as a tactic to reduce transmission risks in the community.

He saw a possibility to replicate the model in Ho Chi Minh City, as many frontliners and philanthropists, including himself, find it hard to return home after being exposed to high infection risks while doing medical tasks or charity work.

“There are times that I shy away from my apartment after finding symptoms of coughing and fever on myself,” he said.

"My colleagues are also put in a tough position, as they also face considerable risk of infection after coming into contact with me.”

Considering the situation, he decided to repurpose his hotel as a gratis apartment building for frontline workers and volunteers in Ho Chi Minh City.

Over the past months, the COVID-19 situation in Ho Chi Minh City has gone for the worse, with case counts climbing steeply and having reached over 15,000 as of Tuesday.

Acknowledging the immense threats, Khoi’s community hotel has been upholding strict safety policy, which includes mandatory medical declaration and adherence to epidemic prevention guidelines from the Ministry of Health.

All entrants are required to present their IDs, while tenants are encouraged to sign up for vaccination as early as possible.

The premises are also housing foreigners who are stranded in Vietnam due to the border closure mandate that was introduced in March 2020.

Huy, Khoi’s business partner, pointed to the story of a Thai businessman who has been staying at Ambassador Hotel for free since last year after his ventures in Vietnam went sour due to the pandemic.

Huy has also been working to support the Thai citizen, as well as other struggling people at the community hotel after being asked to help with Khoi’s charitable cause.

“Khoi has inspired me to pursue philanthropy work for the community,” he stated.

The pandemic also had him struggling, but as Huy sees it, anyone in the hospitality sector is going through the same conundrum or worse.

“At this point, I only focus on helping the community in whatever aspects I’m able to,” he said.

“As an entrepreneur, I sure want to prioritize profits.

“However, I am a citizen of Saigon as well.

"If the city caves in, I would not be able to do business anymore.”

He looks forward to scaling the model to other locales in Vietnam.

“Of late, hotels in Vietnam have been left vacant en masse due to low travel demand, and to leave them that way is such a waste,” he said.

“The community hotel initiative would tie these resources and demands together to help us go through these tough times.”