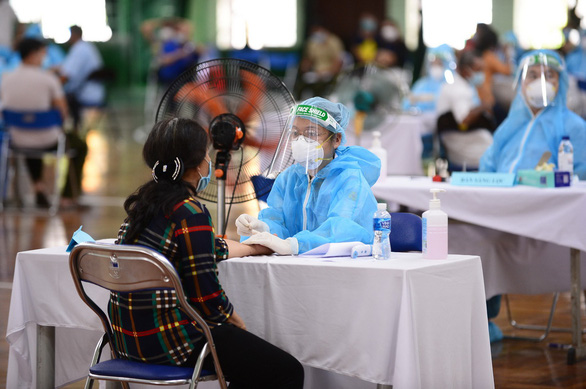 The Ministry of Health reported a record high of more than 3,400 coronavirus cases in Vietnam on Thursday, including almost 2,700 infections in Ho Chi Minh City.

A total of 3,099 cases were found in centralized quarantine centers or isolated areas.

Ho Chi Minh City accounted for 2,691 of the new patients, including 689 cases having been detected previously but only added to the national database on Thursday afternoon.

Vietnam has grappled with a new outbreak since April 27 after more than one year of success in keeping the virus at bay.

The Ministry of Health has registered 37,288 local cases in 58 out of 63 provinces and cities ever since.

The Southeast Asian country has detected 38,858 locally-acquired infections and 1,992 imported cases since the coronavirus first struck it on January 23, 2020, according to the health ministry’s data.

Recoveries have risen to 9,688, including 64 announced on Thursday.

On the same day, the health ministry logged 69 deaths, which were registered in Ho Chi Minh City from June 7 to July 15, taking the toll to 207.

The country has administered over 4.1 million vaccine shots to medical workers, teachers, factory workers, and other frontline staff since it rolled out inoculation on March 8.

Nearly 287,000 people have been fully vaccinated.