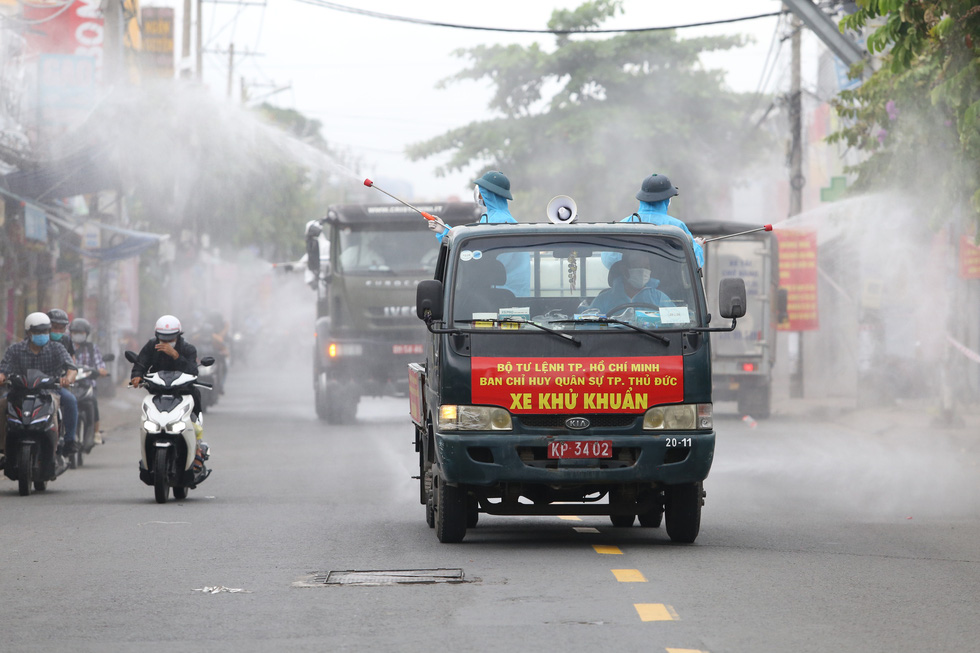 Vietnam’s economic hub Ho Chi Minh City has entered the first day of the seven-day decontamination throughout the city as an effort to curb increasing coronavirus spread that has recently caused thousands of infections every day.

The Ho Chi Minh City Command, in conjunction with two chemical engineering units from the 7th Military Region and the Army’s Chemical Corps, has arranged two sanitization teams and 16 specialized vehicles for the disinfection.

Binh Chanh District and Thu Duc City under Ho Chi Minh City have been the first target locations for the week-long disinfection that started on Friday morning.

Around six tons of chloramine B will be used for the fumigation, the Ho Chi Minh City Command said.

The Command asked all of its units in 21 districts and Thu Duc City to closely coordinate with local administrations to ensure order and safety for the sanitization.

Along with street disinfection by the two teams, it is necessary to develop plans to sterilize residential areas and accommodations for rent by using local forces, the Command said.

The disinfection came as the novel coronavirus has caused 48,800 infections in the city since April 27, when the pandemic’s fourth wave appeared in Vietnam, the municipal Center for Disease Control reported.

The city on Thursday kicked off its fifth COVID-19 vaccination phase for residents belonging to designated priority groups, with a target of administering 930,000 jabs during two or three weeks.

The Ministry of Health on Friday morning confirmed 3,898 new COVID-19 infections, all domestically detected, of which 3,302 were recorded in Ho Chi Minh City.

The latest infections have taken Vietnam’s caseload to 78,269, including 13,421 recoveries, as documented since early 2020.

In this fourth wave, the Southeast Asian country has registered 74,570 domestic infections.

As of Friday, more than 4.4 million vaccine doses have been administered nationwide, with over four million people getting the first shot and some 334,000 people receiving two full doses.