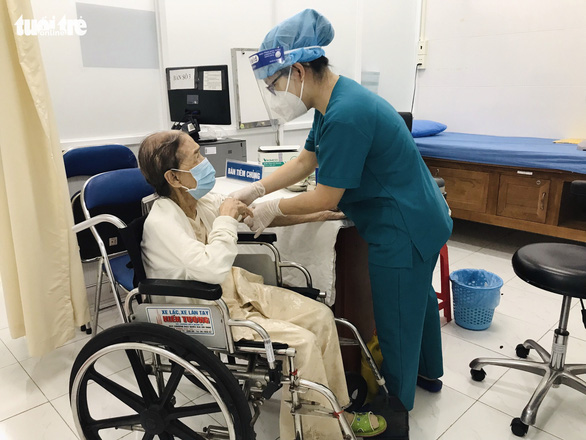 -- Vietnam reported on Thursday morning 3,943 new cases of COVID-19, including two imported and 3,941 local transmissions, according to the Ministry of Health.

-- Police in Hanoi’s Hoan Kiem District said on Wednesday afternoon they had detained a group of six who allegedly masqueraded as militia officers to threaten people who failed to obey COVID-19 prevention regulations and extort their money.

-- Hundreds of medical equipment items from the Vietnam German Friendship Hospital in Hanoi on Wednesday night arrived at the Saigon train station before being transported to Field Hospital No. 13 in Binh Chanh District to help bolster Ho Chi Minh City’s resources for COVID-19 treatment.

-- According to the Vietnam Fatherland Front Committee of Ho Chi Minh City, the city plans to give away more than 500,000 gifts of essential necessities to poverty-stricken people during the social distancing period.

-- More than 150,000 people above 65 years old and those with chronic illness had been partially vaccinated against COVID-19 in Ho Chi Minh City as of 7:30 am on Wednesday, according to the local Department of Health.

-- Vietnam made outstanding achievements in gender equality in ethnic minority and mountainous areas in 2015-19, including a drop of 4.7 percent in the rate of child marriage in ethnic minority groups, the Vietnam News Agency cited a UN Women report released on Wednesday.

-- Fifteen Mai Linh taxis were installed with specialized medical equipment and converted into 24/7 ambulances on Wednesday afternoon to transport patients under a project launched by the city’s Department of Health and Department of Transport.

-- Vietnam’s agro-forestry-aquatic product trade topped US$53.2 billion in January-July, of which some $28.6 billion came from exports, up 26.7 percent year on year, the Vietnam News Agency reported on Wednesday.

-- The People’s Committee of Da Nang said on Wednesday it had approved the planning of four coastal parks along Nguyen Tat Thanh Street.