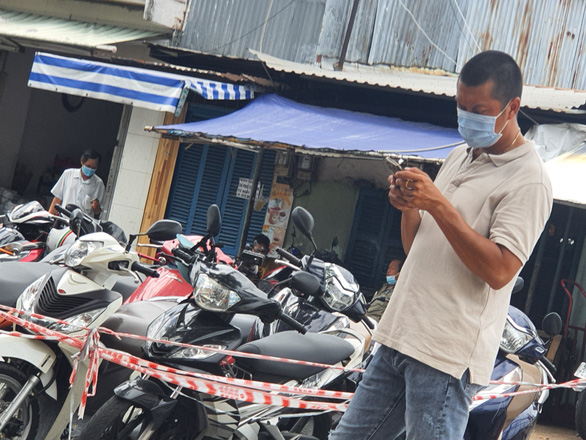 Middlemen in Ho Chi Minh City are pushing their customers up the vaccine priority list by exploiting loopholes in the free-of-charge inoculation drive against COVID-19 that authorities offer.

Although all Ho Chi Minh City citizens can now sign up to get their vaccine through an official portal, the urge to jump the line and get a jab promptly seems to have led some people to go through black-market routes offered by middlemen.

At around 9:30 am on August 13, a man was seen jockeying to move a group of seven individuals through the vaccination site, telling all of them to write Thap Muoi Street, Ward 2, District 6 as their address, regardless of where they actually reside.

Further investigation shows that the address belongs to an eyewear shop, not a residence.

After they completed their forms, the man led the group through a series of administrative procedures before they were given the AstraZeneca vaccine about one hour later.

Referring to him as N., customer P.T.T.K. said the middleman arranged COVID-19 jabs for her whole family for VND2 million (US$88) apiece.

“I feel blessed to receive the vaccine. As long as I am healthy, I can make the money back,” K. said before calling N., asking him to set her acquaintances up for jabs.

Though not assigned to work at the vaccination site, Thao is said to have exerted influence over staffers in terms of how they handle vaccine distribution.

On August 12, for example, Thao was spotted welcoming five individuals from other districts to the site and guiding them through the inoculation process.

He also asked each customer to declare their address as 41 Le Quang Sung Street, a location with several food and hairdressing kiosks.

While two of the five individuals were unable to get jabbed due to pre-existing conditions, the remaining three, including 25-year-old V.D.A. from Thu Duc City, were vaccinated that day.

Thao also assured these individuals that their vaccination information would be updated in Ho Chi Minh City's official database.

Hung, a third vaccine middleman operating out of Nguyen Thien Thuat Elementary School, is a guard at the site. On August 12, he was seen approaching people, offering on-demand jabs for VND1-1.5 million ($44-66) each.

According to Hung, at least ten people have gotten COVID-19 shots using his services; however, with vaccine supplies dwindling, he has been forced to raise his prices.

According to the middlemen, the vaccination slots they helped fill were left open by individuals who either missed their appointments or delayed their jabs due to health conditions.

According to Hung, clients who arrive at the vaccination spot with temporarily high blood pressure can wait in an air-conditioned room he has prepared until their condition stabilizes.

On August 12 and 13, he contacted a multitude of potential clients, talking them into using his services, even offering a VND500,000 ($22) discount.

Hung also suggested that people with high blood pressure get injected at a hospital using his connections. Each dose costs VND2-5 million ($88-219), depending on each vaccine type.

“I have taken two shots and will take my third in three weeks," he claimed.

"I’m able to take them exactly when I want.”

As of Wednesday, Thao had been placed on leave while local authorities were investigating his illegal vaccine racket, Le Thi Thanh Thao, chairman of the District 6 People’s Committee, said in an official document to Tuoi Tre.

The district leader confirmed the existence of the vaccination venue at Nguyen Thien Thuat Elementary School, and assured that the authorities have carefully devised vaccination lists to cover the correct demographics.

Thao’s case was also handed over to the municipal police for further inspection, she added.