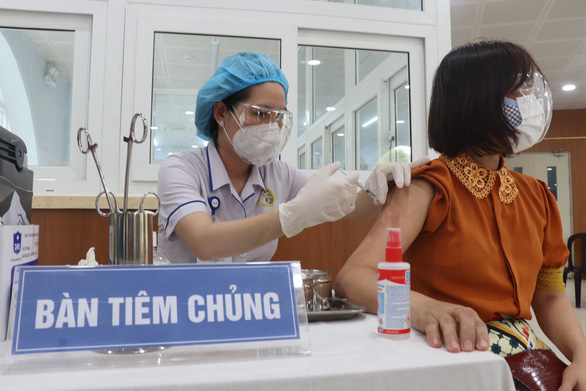 Authorities in Ho Chi Minh City have set a target to provide COVID-19 vaccines to all residents aged 18 and older by the end of September.

The city has approximately 7.2 million people aged 18 and older, Pham Duc Hai, deputy head of the municipal steering committee for COVID-19 prevention and control, said during a meeting on Tuesday.

The municipal authorities have established a four-phase inoculation plan for the remaining time of the year, with priority given to the elderly, people with underlying health conditions, pregnant and breastfeeding women, frontline workers, and those working in essential sectors.

From August 29 to September 15, about 680,000 people will receive their first doses, while 2.1 million others will get their second jabs.

By the end of this stage, the city will have administered the first COVID-19 vaccine shot to 90 percent of residents aged 18 and older.

After the second phase concludes, 100 percent of citizens aged 18 and older will have received at least one shot of COVID-19 vaccine.

During the third and fourth stages, which will run from October 1 to 15 and from October 15 to December 31, the city will focus on administering the second jabs to people who have reached the recommended intervals.

In order to complete this plan, Ho Chi Minh City will need about 8.1 million doses of COVID-19 vaccine, Hai said, adding that the execution of the plan will depend largely on the vaccine allocation from the Ministry of Health.

The best vaccine is the one that is administered the soonest, the official stated, adding that receiving vaccination is both the right and obligation of local residents.

“We cannot live with strict social distancing regulations forever, but these restrictions can only be lifted when certain conditions are met,” Hai remarked.

The country has recorded 457,882 local infections in 62 provinces and cities, including 221,254 cases in Ho Chi Minh City, since the fourth wave broke out on April 27.