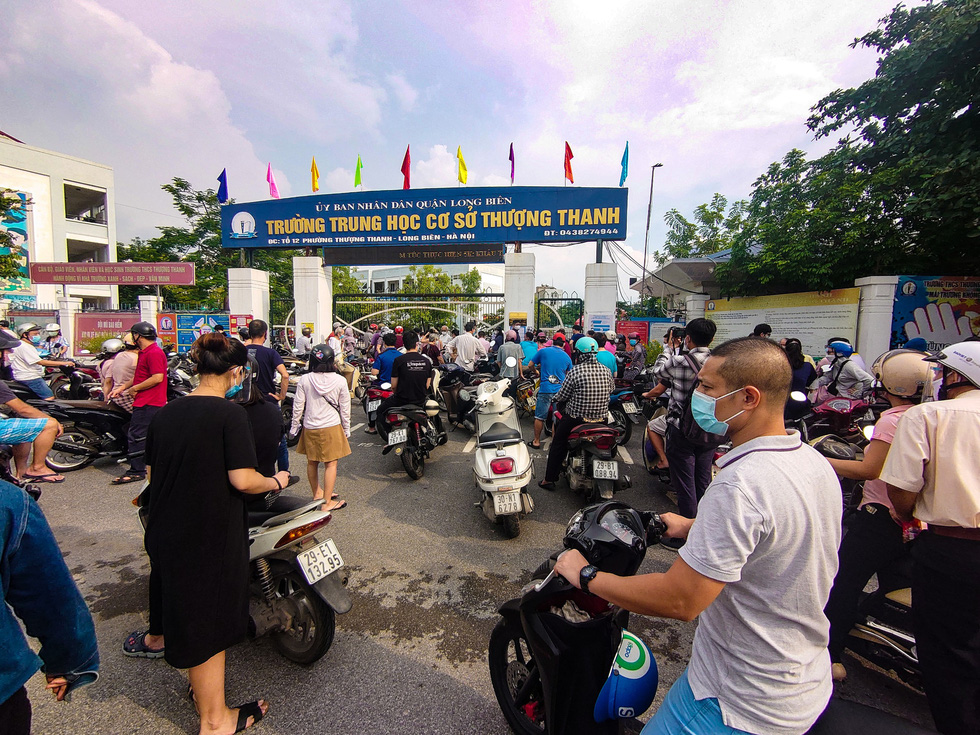 Many COVID-19 vaccination sites in Hanoi have become overcrowded and chaotic as the city has been speeding up the vaccination of all residents aged 18 and older by September 15.

One of the venues was Thuong Thanh Junior High School in Long Bien District, where hundreds of people gathered on Thursday to wait for inoculation, with many of them elbowing one another for a space in the crowd.

Such a chaotic situation is against the epidemic prevention rules of health authorities.

In coping with it, the school’s guards had to temporarily close the gate to ease the overload while the number of people waiting outside the site was still large.

Bui Van Khoa, 29, told Tuoi Tre (Youth) newspaper that he had waited from the afternoon but remained in waiting due to a throng of people coming to the site.

“People waiting here have jostled terribly, especially early in the afternoon, while others have continued to flock to this point," Khoa said.

"I am very anxious since coronavirus carriers may be among the crowd.”

The same scene was recorded at the vaccination point in the district’s Bo De Ward, where hundreds of people hustled against others while waiting for their turns.

Dinh Thi Thu Huong, vice-chairperson of the district’s administration, told Tuoi Tre reporters on Thursday evening that she had directed the authorities of Bo De to remedy the chaotic situation immediately and prevent its recurrence in the coming days.

Huong blamed the disorder on the non-compliance of locals with the vaccination timetables.

“We had issued clear notices to residents and requested them to come to the vaccination points according to the fixed schedule, but many still came early as they were afraid that the vaccine they wish could run out,” Huong explained.

At the inoculation site in Dong Da District’s Khuong Thuong Ward, the same jostling scene was seen on the morning of the same day.

Many people told Tuoi Tre that they had to queue up for the whole afternoon of Wednesday but they could not get vaccinated.

On the following day, they continued getting in line from morning til noon, only to be informed the vaccine had run out, which infuriated many of them.

Vuong Thai Duong, secretary of the Party Committee of Khuong Thuong Ward, said that the ward had received reports of the problem and taken measures to correct it.

In a dispatch issued early this week, the Hanoi administration set out a target of completing the vaccination of all its residents aged 18 and older by September 15 as a condition for the capital city to resume business activities and improve its socio-economic growth amid the pandemic.

By Thursday evening, the numbers of people receiving the first and second vaccine doses in the city, whose population is around eight million, had reached some 3.49 million and over 555,800, respectively, according to the national COVID-19 vaccination portal.

The corresponding figures for the country were nearly 20.6 million and 4.2 million.

The capital city has documented 4,225 COVID-19 cases, including 47 deaths, since the pandemic hit the country in early 2020, the Ministry of Health reported on Thursday evening.