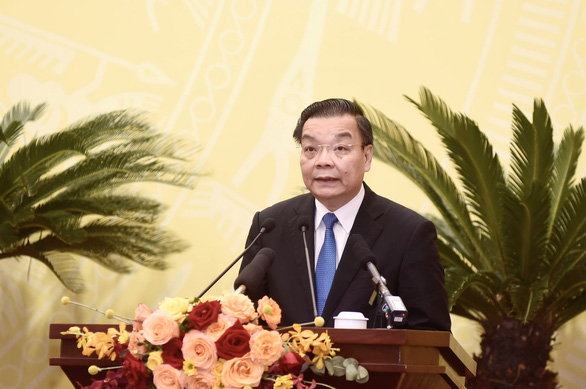 Hanoi is on the lookout for COVID-19 vaccines for children, chairman of the municipal People’s Committee Chu Ngoc Anh said on Thursday.

In addition, the city is also planning to ensure two-dose vaccine coverage for residents by November, chairman Anh announced at a meeting of the local People's Council .

Despite facing many struggles engendered by the coronavirus pandemic, which resurged in late April and is still wreaking havoc, the city managed to meet certain economic and social achievements.

However, many other goals, including public budget revenue, fell short, while livelihoods and the daily life of local dwellers have been significantly affected.

The city is seeing positive results with its social distancing tactics, as reflected by a declining daily caseload and a reduction of at-risk zones over the past few weeks.

Most of the unvaccinated are people with official recommendations against taking the jabs after undergoing pre-screenings.

A total of 694,394 local dwellers have received the two-dose regimen, accounting for 8.4 percent of the local adult demographic.

“The city has rolled out solutions at full force, but it still takes the realistic conditions and residents’ wellness into consideration,” the chairman said.

In the last months of 2021, Anh said the city will focus on eight sets of goals, including an economic growth rate of 6.98 percent in the fourth quarter and 4.54 percent for the entire year, as well as a high priority on epidemic prevention.

“The stakes are high for the remaining months of 2021, but the city authority will exert itself to complete the goals set previously,” chairman Anh said.