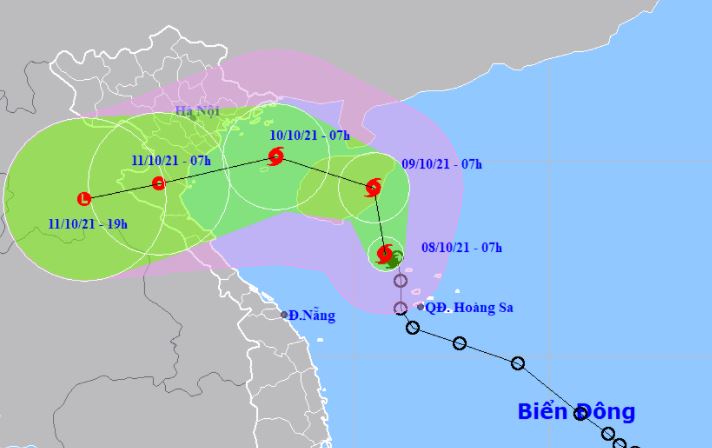 A tropical depression in the East Vietnam Sea has developed into a storm and is forecast to make landfall in north-central Vietnam sometime in the next few days.

Tropical Storm Lionrock, the seventh to hit Vietnam this year, was located in the maritime area northwest of Vietnam's Hoang Sa (Paracel) archipelago at 7:00 am on Friday, according to the National Center for Hydro-meteorological Forecasting.

The average wind speed was at 60-75km per hour while gusts blew at 100km an hour.

Over the next 24 hours, the storm is expected to travel north, pick up strength, and hit the southeastern area of China’s Hainan Island by 7:00 am on Saturday.

In the next 24 to 48 hours, it will shift northwest and move toward Bach Long Vi Island off the northern city of Hai Phong by 7:00 am on Sunday, with winds at 80-90km per hour.

Storm Lionrock will then travel southwestward over the next 48 to 72 hours, weaken into a tropical depression, and make landfall in north-central provinces, with wind speed decreasing to 40-50km an hour.

Medium to heavy rains of 50-100 millimeters are forecast to dampen localities from north-central Quang Binh Province to central Quang Ngai Province on Friday.

Downpours of 100-250 millimeters will lash northern Vietnam from October 9 to 12.

Between October 10 and 12, rainfall of 150-350 millimeters will also batter the remaining provinces in the north-central region.

The weather pattern will pose a high risk of flash floods and landslides in mountainous areas and inundation in low-lying areas.