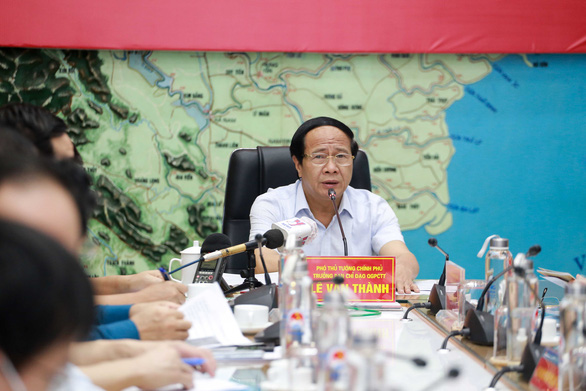 Passenger transport by railway and road must be resumed in the next two days to serve people wishing to return to their hometowns, avoiding them having to use personal bikes or even walk for their long journeys, especially in bad weather conditions, Deputy Prime Minister Le Van Thanh has requested.

Thanh, also head of the head of the National Steering Committee for Natural Disaster Prevention and Control, made the request at a meeting held on Sunday morning in response to storm Lionrock that has weakened into a depression and will hit the country later the same day.

His request has been prompted by the reality that throngs of people have left their residences in virus-hit southern localities for their hometowns on motorbikes since October 1, when the country began to loosen movement restrictions to reopen its socio-economic operations while continuing fighting the pandemic.

“An official dispatch will be issued this afternoon to all relevant ministries and agencies, asking them to resume public passenger transport by railway and road within two days,” Thanh told the meeting.

The deputy premier directed that the two transport services should be resumed sooner than expected to meet the travel demand of returnees.

Earlier on Friday, Deputy Minister of Transport Nguyen Ngoc Dong at an online meeting asked the railway authorities to complete a railway recovery plan by October 15 and submit to the government for approval.

The deputy PM also asked authorities at all levels give supports to returnees during their trips back to hometowns.

Thanh made such directives after hearing reports related to the waves of people coming back to their native provinces from southern localities where they had been stranded for months during strict lockdowns.

Tran Quang Hoai, deputy head of the committee, told the meeting that such returnees may be in danger while traveling on bikes since many localities in the northern and central regions have been lashed by torrential rains triggered by the coming degraded storm.

“The bad weather conditions are forecast to last for 10 days from now, as one or two other storms may enter the East Vietnam Sea soon after Lionrock, so the committee has issued dispatches to all relevant authorities asking them to take measures to ensure safety for returnees,” Hoai said.

Four southern business hubs including Ho Chi Minh City and the three provinces of Binh Duong, Long An and Dong Nai have been asked to inform local workers about the bad weather developments in days to come, so that they can reschedule their journeys to avoid possible dangers, the meeting was told.

More than 26,000 people in southern localities have travelled along National Highway 1 and Truong Son Trail to come back to their native lands, said Colonel Nguyen Hong Nguyen from the Ministry of Public Security.

Notably, among more than 5,700 people travelled through a National Highway 1 section in Ha Nam Province from October 5 to 10, nearly 1,900 people, including 153 children, went on foot, Colonel Nguyen said.

Such travel is unsafe and dangerous, especially in bad weather conditions, the official commented.