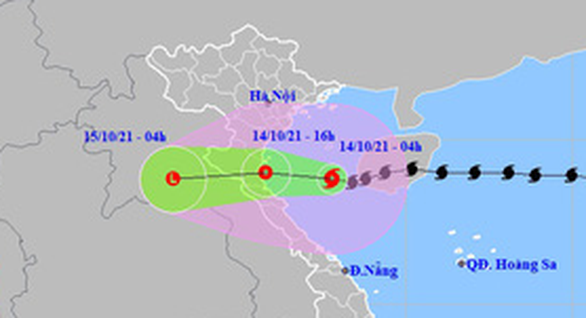 Typhoon Kompasu weakens into depression on way to Vietnam

Typhoon Kompasu, the eighth storm in the East Vietnam Sea so far this year, has been downgraded into a tropical depression while moving toward Vietnam’s north-central region, the national weather agency reported.

The depression was located around 130km from Nam Dinh Province, 150km from Thanh Hoa, and 160km from Nghe An at 10:00 am on Thursday, the National Center for Hydro-meteorological Forecasting said.

The depression will quickly move west at a speed of 25 to 30km per hour and it will further weaken into a low-pressure system before entering the north-central region in Nghe An and Thanh Hoa Provinces over the next 12 hours, with winds blowing less than 40km per hour.

The coastal area from Quang Ninh to Nghe An has had strong gusts of up to 61km per hour from Thursday morning.

The Gulf of Tonkin has seen rough seas with waves rising to four meters and winds reaching 88km per hour.

The northern region and the area from Thanh Hoa to Quang Binh Provinces will have moderate to heavy rains with a rainfall of 50 to 150 millimeters during Thursday.

Flash floods and landslides may occur in mountainous areas while inundation is likely to hit low-lying and riverside areas.

Cold weather will hit the northern region from Thursday through Friday, especially in mountainous areas, where the lowest temperatures will range from 19 to 22 degrees Celsius, even at 18 degrees Celsius in some places.

Due to the influence of the strengthened cold air combined with a low-pressure area that will likely appear on the tropical convergence zone, the central region will be covered by heavy rains from October 16 to 19.

From now until October 17, showers and thunderstorms will take place in the Central Highlands and the southern region, with some locations having heavy rains and precipitation of 30 to 80 millimeters.

During the last quarter of this year, the East Vietnam Sea will see five to seven storms or tropical depressions, of which two to four will directly affect the mainland, the center previously forecast.