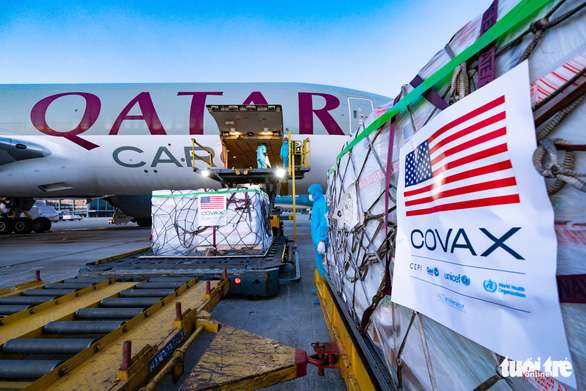 Among the vaccine donations, 1,317,420 doses arrived in Hanoi on Sunday and 1,316,250 shots reached Ho Chi Minh City on Monday morning, the U.S. Embassy said in a media release.

“This is the sixth COVAX delivery to Vietnam, totaling 12.1 million COVID-19 vaccine doses made available by the U.S. so far,” the media release said, referring to a vaccine-sharing scheme co-led by the World Health Organization.

The U.S. has committed more than US$30.2 million in COVID-19 assistance to Vietnam since the beginning of the pandemic.

“We stand shoulder-to-shoulder with Vietnam in the fight against COVID-19,” the U.S. Embassy said in the release.

“Vietnam has been a leading recipient of these doses,” the release said.

In addition to vaccine donations, the U.S. has provided Vietnam with COVID-19 test and vaccine storage equipment, and life-saving devices such as ventilators, oxygen concentrators, and liquid-oxygen tanks.

On October 12, the Ministry of Health received 36 ultra-low temperature freezers donated by the U.S. to assist Vietnam in COVID-19 vaccine storage.

They were the first of 111 ultra-low temperature, medical-grade storage units that the U.S. Department of Defense had pledged to provide to Vietnam with a total value of approximately $1 million.

Last week, the U.S. Agency for International Development (USAID) announced that the U.S. had successfully donated and delivered 200 million COVID-19 vaccines to more than 100 countries around the world.

“To end the pandemic and prevent the emergence of new variants, as well as future outbreaks within our nation’s borders, we must continue to do our part to help vaccinate the world,” USAID administrator Samantha Power said in a statement.

In addition to the U.S., the largest donor of COVID-19 vaccines to Vietnam so far, the Southeast Asian country has received vaccine donations from other countries including Japan, Australia, the UK, France, Italy, Russia, the Czech Republic, and China, among others.

The nation aims to secure 150 million COVID-19 vaccine shots to cover at least two-thirds of its 98-million population, and it has so far got more than 100 million jabs from different sources, including the COVAX Facility, contractual purchases, and donations.

By Sunday, the country had administered nearly 51.9 million first shots and some 21 million second jabs to people nationwide, the health ministry reported.

The nation has recently seen sharp reductions in both coronavirus infections and deaths, with 4,028 patients and 53 fatalities reported on Sunday compared to the corresponding figures of 8,537 and 203 a month earlier, the ministry’s data shows.