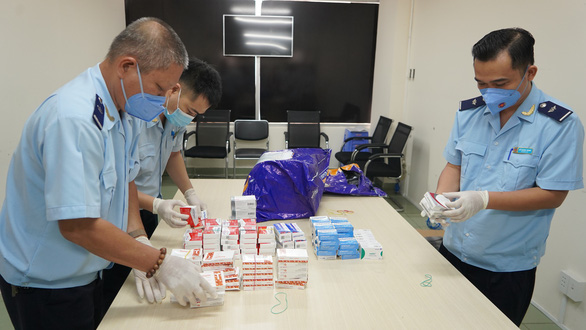 These boxes were found among the personal items, clothes, confectionery, and others contained in the two packages that were imported as gifts, the municipal Department of Customs said.

More than 3,000 medicine tablets for use in treating COVID-19 patients were found from the 266 boxes.

The packages were carried by a direct flight from Russia to Hanoi, from where they were transported to Ho Chi Minh City.

The Ho Chi Minh City addresses written on both packages for goods delivery are fake, the department said.

The consignees’ phone numbers registered with the shipping firm are incorrect, too.

“This is a recent trick of smugglers who use bogus addresses to avoid being caught by authorities," VTC News cited the department as saying.

"However, they are able to monitor the waybills for their shipments and whenever a shipment gets through customs clearance, they will contact customs offices to receive it.”

Relevant agencies are investigating the case.

Recently, certain types of medicines designated the Ministry of Health for use in COVID-19 treatment under its control have been put up for sale widely on the market and e-commerce websites, without the ministry’s authorization.

The ministry has released warnings against the illegal circulation of such drugs.